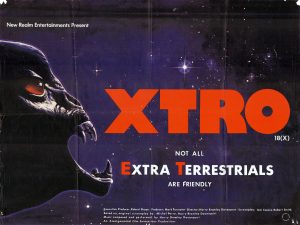 After being abducted by aliens three years earlier Sam (Phillip Sayer) returns to earth and reunites himself with his wife Rachel (Bernice Stegers) and son Tony (Simon Nash). While Sam was away Rachel moved on with her life and started seeing Joe (Danny Brainin) and after the arrival of Sam at the couples flat Joe begins to suspect that Sam is not all that he appears to be.

Xtro’ is not a bad little sci-fi horror movie in my opinion. While it suffers from bad, wooden acting and a sometimes incoherent plot the film is generally well thought out and capably directed by Harry Bromley Davenport. The biggest complaint I have with the movie was the lack of character development with regards to the alien. While some creatures or villains are scarier when the viewer is unaware of its origins I feel this particular life form would have benefited from at least a slight background story which was sadly lacking. However, though the plot can be sometimes a little confusing, most of the story eventually comes across well despite leaving a few unanswered questions and being slow in places. As I previously mentioned the film was fairly well directed and this really comes through in a few scenes which generally have an extremely trippy and unnerving effect.

The effects in “Xtro’ are quite surprisingly of very good quality especially considering the budget for this flick. Though one or two of the make-up effects looked rather out-of-place from the rest most of the effects were well produced and made “Xtro’ a rather gory movie which should keep gore fans happy. This movie found its way onto the infamous Video Nasty list and though it probably should not have been put there one can almost understand why as it features a couple of particularly brutal scenes involving women. Having said that there are far more vile movies out there and it would seem “Xtro’ was just a poor victim of media propaganda.