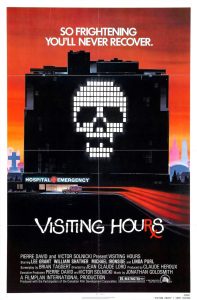 One of the better Canadian killer-thrillers of the 80’s is this solid shocker.

TV journalist is attacked by a maniac and taken to the hospital, now the obsessive creep is determined to make sure she doesn’t get well soon!

Visiting Hours is a film that, like most slasher films of the 80’s, has gotten a bad reputation from critics. However this film is much more than mere slasher garbage! Visiting Hours is a thriller that takes its time to build true suspense, a well-paced plot, and some believable characters. It’s a film that, unlike most of the genre, focuses upon the warped character of its villain rather than on the would-be victims. The murder sequences are effectively disturbing, but not overly gory.

The direction of Jean Claude Lord, along with an unsettling music score, combine to make an atmospheric sense of dread through out the film. It manages to make even the sprawling corridors of the hospital setting into a claustrophobic maze. It makes for some nicely suspenseful attack/chase scenes.

The biggest highlight of this film comes from its cast though. Lee Grant is strong as the feminist TV journalist that becomes the target to the killer. Linda Purl does a good turn as a caring nurse, as does Lenore Zann as a street-wise teen. Greatest of all though is villain Michael Ironside. Ironside makes for a truly creepy and compelling murderer. He truly steals the show.

For those that are seeking a slasher film with a bit more of an intelligence to it, Visiting Hours is a fine choice. Don’t listen to the critics on this one folks – it’s a better film than you may have heard.