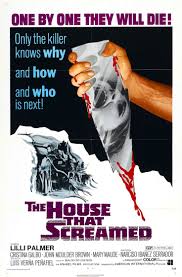 “The House That Screamed,” better known in Spain as “La residencia” (“The Residence”), focuses on a remote girls’ boarding school in nineteenth-century France. The school is run by the stone-cold Mademoiselle Fourneau (Lilli Palmer), whose methods of punishment border on sadism. New student Thérèse (Cristina Galbó) arrives, and almost immediately notices something is not right with the headmistress, her wayward son, or her female peerswhich becomes increasingly clear as students begin to disappear into the night.

Let’s be honesta film with a title like “The House That Screamed” doesn’t exactly generate high expectations, and the plot summary on IMDb would further lead one to assume this film is in the ranks of the sleaziest of Euro-sleaze. I went into the film with such expectations, but about an hour through it, realized there was a huge chasm between what I’d anticipated and what I was getting.

This is not to say that “The House That Screamed” is necessarily a masterpiecebut it’s damn good. The film operates almost more as an astute period piece than it does an outright horror film; the isolated school setting and multitude of sexual repression themes would recall “The Beguiled,” though “House” predates itand this is another reason the film seems to have garnered more interest in recent years. Given that its production took place in 1969, it begins to look more and more like a predecessor of the contemporary slasher film.

It is supremely Gothic in its aesthetics, with the majority of the film taking place within the confines of the castle-like school. The costumes and sets are historically accurate and elaborate, and the film captures the era successfully. Apparently pioneering (at least in Spanish cinema) slow-motion shots of murder sequences add a grim layer to the film. There is not much in the way of violence, but the lingering murder scenes are effective. The film has often been criticized for being too slow, and those claims are somewhat fair; it does begin to drag its feet in the second act, but the production values and performances are enough to keep most audiences chugging along with it. The performances are all above-average, with Lilli Palmer leading the cast as the stone-faced headmistress, and “Let Sleeping Corpses Lie” star Cristina Galbó as the newcomer who seems to stir up the school’s dynamics.

The conclusion is effective in spite of the fact that it seems in retrospect quite obvious, but in any case, I was taken by surprise. All in all, “The House That Screamed” truly outdoes its title, which is something of a rare occurrence in the genre. It’s a semi-cerebral, moody, and atmospheric film with a handful of great scare scenes (the conclusion in the attic is genuinely nail-biting). Given its 1969 production, its influence seems fairly obvious, whether it be on the likes of Argento or even “Black Christmas”but even in spite of those conjectures, the film succeeds on its own as a Gothic murder mystery that functions as well as a period piece as it does a horror film.