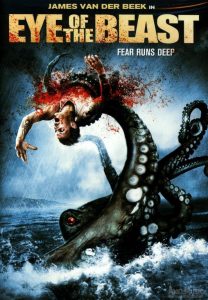 Arriving in a small fishing village, a researcher trying to investigate a local problem finds the cause to be a monstrous squid living in the waters and teams with some locals to try to stop the creature’ rampage.

As a whole this was a decent overall creature feature. One of the better aspects is the pretty decent work it features as a build-up to unveiling the creature with a couple of impressive routes to get there. The first half is mostly based on the dueling plots featuring both the creature’s attacks and the concurrent search on the outer edges of the story that picks up traces of those encounters yet never makes definitive contact so it remains elusive. The random attacks on the couple in the boat or the family on the beach make up decent enough attacks while the search at sea makes for plenty of exciting times here as the technology tries to catch-up to the creature comes of nicely. The discovery of the claw- marks is the kick-start into this revelation and it allows the great revelation all its great impact when it proves them right. The other big plus here is the main battle with the creature at the end, which finally gets them up-close with the creature battling pretty realistic props for the tentacles coming onto the boat and leaving some rather fun tactics of fighting them off as well as some gory tactics here for the creature’s attacks which make this all quite enjoyable. These here are enough to hold this up against the few small flaws in here. One of the main issues here is the first half to this really having so few worthwhile moments that the pace really suffers in here with the constant talk of her need for affection and the on-going war with the local tribes against the fisherman takes up main parts of the opening. In effect, these issues combine together into such a huge portion of the story that they effectively push the creature out of the first half, and while these do a great job of creating a believable building point for the creature’s appearance these are hardly all that interesting all so it really tends to drag this down somewhat. The other big thing holding this one down is the creatures’ actual appearance which clashes horribly with the lone sequence we see a full view of it. The creatures’ prosthetics look quite good, but there’s a dramatic shift when the CGI based full-size creature appearance, and these are what really keep this from its best parts.