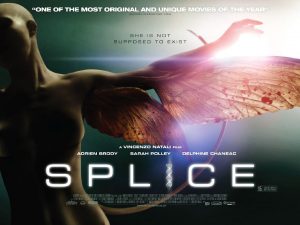 Clive (Adrien Brody) and Elsa (Sarah Polley) are genetic scientists attempting to come up with a breakthrough protein that will help combat against deadly diseases. But the pharmaceutical company financing their work wants to push ahead, despite their insistence of needing more time to perfect their work. With the prospect of losing everything they have worked for, the couple secretly splices together a cocktail of animal DNA with human DNA, and wait to see what happens. Rather quickly, an extraordinary creature is born, and the pair must figure out what to do with it.

It may be 2010, but Splice owes its entire existence to the pioneering works of David Cronenberg and David Lynch. Yes, there are elements of Frankenstein and the work of H.P. Lovecraft scattered throughout the film, but the body horror, the mutations, the sexual depravity, the creature itself  all of these elements are cut of the same cloth the two legendary directors gave birth to in the 1970s and 1980s. But it is almost too easy to narrow down the little homages, references, and ideas co-writer and director Vincenzo Natali has dropped into his other-worldly tale. The whole film has a pulse unlike anything I have seen from the genre in recent years (outside of the enigmatic Avatar), and its low budget grittiness helps the tones and ideas of the picture go a very long way.

It is because of these elements that Splice rises out of the gluttony of modern horror and science fiction films. It has the old school charm, and it uses that to its advantage to create a rather unique film for its time. Natali, alongside co-writers Antoinette Terry Bryant and Doug Taylor, have crafted an uncompromising view of a potential nightmare of the future. Much like other great science fiction titles, Splice makes the audience think very hard about the morals being broken at any given time, the consequences of the characters’ actions, and the very nightmare before them of whether a splicing experiment gone wrong like this one, could actually happen in reality.

If there is anything wrong with the film, it is the final act. Up until that point, everything feels very calculated and wildly unpredictable (especially one scene that rather easily disgusted the entire audience I was sitting with, including myself). But the last chunk of the film and especially in the dying moments of the film, the plotting seems very ill-conceived. It feels as if the writers had squandered all of their good ideas for the first two-thirds of the movie, and then ran out of ideas as to what to do afterwards. There are some good ideas at play here, but they just lack the intensity, enthusiasm and uniqueness of what came before. Ironically, a lot of these last scenes are in the television spots that make Splice look like any other horror movie, while the rest of the film tries its hardest to distance itself from everything else.

The various creatures that appear during the film, specifically the differing evolutions of the spliced together science project nicknamed Dren, are the true marvel of the film. Much like District 9, the filmmakers here have taken a significantly smaller sum of money than the average Hollywood blockbuster, and have created effects that appear all the more realistic and genuinely impressive. While some look a whole lot better than others (the early renditions of Dren suffer the most), all of these nightmarish beings look excellent and for all intents and purposes, a lot better than they ever should have looked. Great care and detail went into creating these effects, and even more went into some of the makeup used on Delphine Chanéac and Abigail Chu to make the look of Dren become increasingly more believable. The work here is truly spectacular, and compliments the script wonderfully.

The unfortunate thing about having such small casts is that the lead actors end up doing the entirety of the heavy lifting. But this is not a problem for Polley or Brody, who appears to have found a new resonance within the Hollywood zeitgeist, years after proving himself worthy of the big time in his Oscar-winning turn in The Pianist. Both are more than qualified for keeping the film afloat, and bring a passion to the small roles. Neither is terribly well written, but both actors breathe depth into their characters and performances. They have just the right conviction to their roles. They never waver or alter their style, even when the film veers into disturbing territory or all out insanity. Their chemistry is also quite well developed, and despite the initial weirdness, they are very believable as a couple.

The real marvel of the film however is undoubtedly Chanéac. She is simply magnificent in her role as Dren. She has to emote for the entire film (the creature does not really learn to talk), in various stages of dress, and she is more than up to the task. Her quick tonal changes reflect both the character’s struggle for identity, and the immediacy and honesty of the portrayal. Much like Polley and Brody, Chanéac has a heightened conviction to the role that never falters. Her depiction of this monster makes it all the more human, and she makes genuine horror still look devastating.