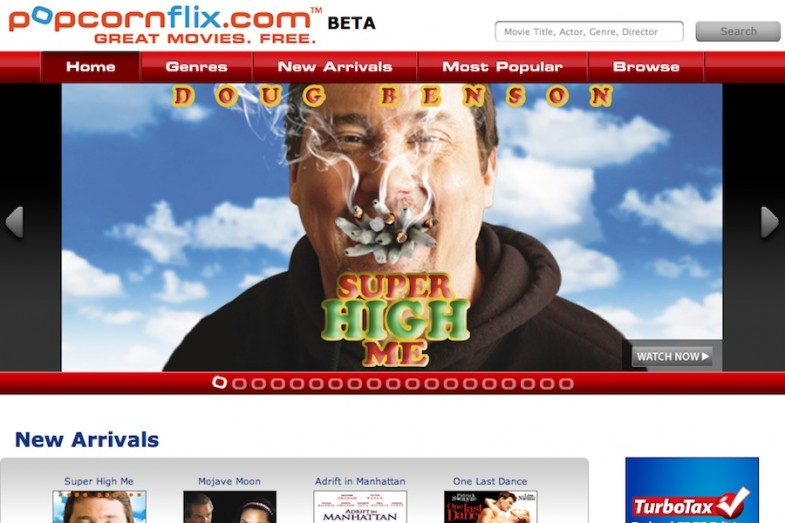 Up for an 11-year-old R-rated indie thriller starring the late Dennis Hopper? How about a 2006 romantic comedy featuring an ensemble cast that includes Seinfeld‘s Jason Alexander and Sons of Anarchy‘s Ron Perlman?

But wait, you say don’t want to pay a subscription fee of $7.99 a month to see lesser-known, non-studio titles like Choke and How to Go Out on a Date in Queens?

New York-based independent film distributor Screen Media, operator of the fledgling streaming movie site Popcornflix.com, is making an ad-supported bet that there are plenty of consumers just like you.

Boasting a title of around 400 indie films and currently streaming what it says are around 500,000 movie views a month, Screen believes its year-old free service can find a niche in an ad-supported streaming market that also includes such incumbents as market leader Hulu, which is focused on TV programming, and SnagFilms, which is just beginning to branch out from documentary fare. Screen also hopes Popcornflix can become an alternative to Netflix, which charges a monthly subscription to stream a library of largely obscure films.

Popcornflix is laden with B-movie fare — low-budget genre films, many of them featuring well-known talent but few boasting well-known titles. Like Netflix, there are hidden gems, such as 2006′s acclaimed Maggie Gyllenhaal drama Sherrybaby, or the 1966 surfing documentary classic The Endless Summer.

Popcornflix has just introduced newly upgraded apps for Apple iOS devices and Roku set-top boxes in the U.S., and is currently rolling out apps for those same platforms in regions like Canada and the U.K. The company also expects to soon launch apps for Android mobile devices and Samsung smart TVs.

Screen Media senior VP of digital Gary Delfiner believes, with this expansion of accessibility, the service could triple in usage to around 1.5 million monthly movie views by year’s end.

“We wanted to build a footprint before we built traffic, and I think we’re getting there,” Delfiner said.

Through acquisitions made by Screen Media’s home entertainment division and by Popcornflix itself, and with aggregation deals in place with 15 indie film suppliers, Delfiner believes the site will soon double its cinematic offerings.

“One of the smart things we’ve done as a company, while building our library, we never negotiated away our digital rights when we made film acquisitions,” he said. “We knew they’d be valuable so we kept them.”

Screen also controls an extensive library of foreign rights, owning titles in every region in the world in which movies are sold. In fact, once the full compliment of player apps rolls out abroad this year, Delfiner expects as much as 25 percent of Popcornflix’s revenue to come from overseas channels.

For now, revenue remains nascent and confined to what’s brought in on ad networks including those operated by Rhythm New Media. But Delfiner believes that by the end of 2012, Popcornflix will be in a position to directly sell its platform to advertisers, much as Hulu does. In fact, Screen is currently in negotiation with an unnamed company to handle direct sales, Delfiner said.

Of course, Popcornflix doesn’t have the resources of Hulu, which is backed by News Corp., Comcast/NBCU and Disney, and can afford to promote itself with national ads during the Super Bowl.

Instead, it’ll have to rely on word of mouth and strategic alliances to spur growth in the near term, Delfiner conceded. For example, he said Screen Media is currently in talks with the publisher of a top female-targeted consumer magazine to syndicate its content on the publication’s website.

Employing a staff of only around 25, 10-year-old Screen Media is a privately funded indie film company, backed by Joseph Kovacs and other media investors, and rooted in the halcyon days of DVD distribution.

It was in that mid-2000 era that the company began building its library, acquiring titles and lucratively releasing them straight to disc.

With domestic DVD sales dwindling to nearly half of what they used to be, of course, Screen about a year ago set a course to become a digital distribution company.

“This doesn’t come naturally for me,” conceded Delfiner, a veteran home entertainment executive whose roots extend back two decades to producer Aaron Spelling’s Worldvision Home Video. “We had to learn almost everything — we had to learn how the ad business worked, all that stuff. It’s not for the weak at heart, and it takes a lot of money. But you can buy technical expertise. And we have the films.”