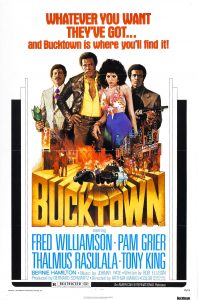 Blaxploitation flick about a man (Fred Williamson) who travels south to bury his brother but learns that the place is being run by a bunch of crackers (redneck white folks). After the cops try bullying him, the man calls in his posse and soon they wipe out the rednecks but then the posse wants to take over, which Mr. Williamson isn’t going to stand for. This film starts out very entertaining with the type of trash you’d expect from 70’s blaxploitation. You got some great dialogue including a brilliantly funny line from Williamson regarding a pig and you’ve got countless, over the top racial slurs being thrown around in such jive that you can’t help but laugh. What really kills the film is when the posse shows up because the violence is so strong and distasteful that it actually kills the good time the film was having. The second half with Williamson taking on his posse is just downright boring. Pam Grier plays the love interest with Carl Weathers playing one member of the posse.