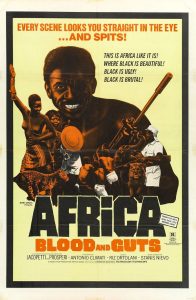 Africa Addio, more commonly known as Africa Blood & Guts (so named by infamous exploitation distributor Jerry Gross), is undeniably masterful at holding one’s attention. But it makes the sleaze and sensationalism of Mondo Cane seem like something produced by Walt Disney.

This movie is insane. It switches randomly from horrifying to absurd to educational to beautiful to creepy to disturbing to … well, you get the idea.

Pumped up relentlessly by it’s makers to be a serious, unbiased look at the political and social upheaval occurring in Africa during the late sixties, the movie is about as far from that as you can imagine. So many scenes are obviously fabricated outright or manipulated by the filmmakers, it’s difficult to tell what’s real and what’s staged. In a way, however, this makes the movie even more fascinating, though more for the shameless exploits of the filmmakers than the subject matter.

There are such ridiculous scenes as a tribe of African natives emerging from their tents to play a bluesy rock song, complete with a horn section and funky piano and a scene in which African women get dressed up in “civilized” attire. These are juxtaposed with scenes of executions and rioting, footage of mass graves and poachers at work. The accusation that the filmmakers actually incited much of the violence displayed on screen is difficult to discount completely.

Once again, there’s plenty of live animal slaughter (an elephant being speared to death is nearly impossible to sit through unflinchingly), much of which is perpetrated by so-called “hunters”, who have the nerve to act proud at having shot an elephant to death, after it’s already been exhausted by a helicopter taunting it.

The whole movie makes you furious at the treatment of the people of the country, having their land invaded by outsiders who force them to conform to their own customs, and works (perhaps unintentionally) as a very disturbing parallel to the white settlers treatment of the Native Americans centuries ago.

Recently released as part of a Mondo box set by Blue Underground, which contains both the uncut English version, as well as the much more violent “Director’s Cut.” The director’s version contains the infamous sequence in which a hippopotamus is speared to death.

Recommended for Mondo fans. Others will probably be too disgusted to get through more than a few minutes of it. The making of this movie was an inspiration of Ruggero Deodato’s Cannibal Holocaust.