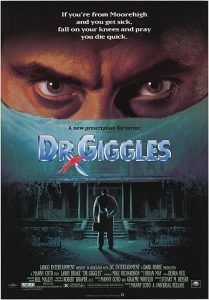 Very much to my surprise I enjoyed viewing this film and at times it broke me up with laughter and at the same time furnished plenty of blood and gore. Larry Drake,(Dr. Evan Rendell ),”Spun”,’02, gave a great performance and looked more like your local butcher than the role of doctor. Dr Rendell always wanted to be a doctor since he was a young boy cutting up stuffed dolls and animals and his father who was also a doctor wanted him to follow in his footsteps. However, after the doctor lost his wife because of a heart condition, he went sorta nuts and had a funny giggle whenever he felt uptight or happy! His son followed in his footsteps and tried very hard to help Holly Marie Combs, (Jennifer Campbell), “A Reason to Believe” ,’95, with her heart condition. There was plenty of lustful scenes and hot to trot teenagers. One young man was trying to obtain a condom that had fallen into a toilet bowl with a tooth brush. This film is really a great COMEDY with lots of HORROR!!