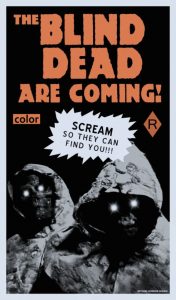 Despite a slow start, Amando de Ossorio’s Tombs of the Blinddead soon picks up and morphs into the exploitation highlight that you were no doubt expecting going into it. Naturally, it’s full of plot holes and dubious character decisions; but it doesn’t matter, because it’s Ossorio’s story surrounding the knights, along with the terrifying spectacle of the Templars rising from their tombs that makes this film what it is. The intro to the film gives you an impression of what you’re in for, as we glide through an ancient monastery. This creepy sequence is very much coherent with the style of this film. Amando de Ossorio seems more concerned with making sure that his creations, the knights themselves, look as decomposed and disgusting as possible – and he truly succeeds. The gore takes a backseat, therefore, but it doesn’t matter at all. The plot follows three friends on a train, one of which decides to leave that safe haven and spend the knight in the deserted town surrounding the monastery. Unbeknown to her, that’s the same place where Templar knights were left to the crow’s years earlier – and they’re still mad about it.

When you think of zombie movies, it’s always George Romero’s gory classics that spring to mind – and that is another thing that is great about this movie. Tombs of the Blinddead has completely made it’s own style, and originality is something that the horror genre could use more of. Of course, similar plots to this one have been used before, but never in exactly this way. Another thing I admire about the director is the fact that he’s obviously more concerned with the horror of the story than anything else. Exploitation flicks like this tend to show a lot of nudity or other things that aren’t really relevant – but this flick has made a real effort to stay away from needless elements as much as possible. Fans of intellectual cinema wont find much to like here – the dialogue is trite and the acting is rubbish – but there’s no denying that this film has at least something resembling a respectable status within the horror genre. The fact that it’s been remembered over thirty years on shows that – and if you’re a fan of this sort of film, then you should definitely make sure you see Tombs of the Blinddead!

0 44
Rebuilding The Foundations Of Movie Going