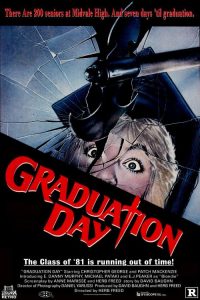 “Graduation Day” centers on a southern California high school where the track team’s star athlete dies during a race. Her Navy sister arrives in town after the event, and the remaining track athletes begin getting picked off one by one leading up to the high school’s graduation day.

An early follower of the slasher trend that dominated the early eighties, “Graduation Day” has the distinguishing element of being anchored in a significant event in any teenager’s life—their graduation—but the truth is, the film could have realistically taken place at any point in the school year, as, save for one plot point, the graduation date plays a very insignificant role in the narrative. Its commitment to the “graduation day” event is more a spin on the slasher trend to set films on holidays or around significant cultural calendar dates; “Graduation Day” takes its cues from the following year’s “Prom Night” rather significantly.

As much as the film is in imitator, that’s not where its issues lie; rather, the film is styleless to a fault. Save some hokey synth pieces and a couple of effective POV shots, the film is aesthetically bland, and also suffers from distractingly sloppy editing that detracts from even the most tense of scenes. There are a handful of amusing and relatively violent murder scenes, but the general tonal pallidness of the film is ever present. Christopher George plays a sleazy coach here, with Patch Mackenzie who is mildly likable as the overbearing elder sister of the deceased track athlete. The finale has a couple of grotesque moments, but the showdown is ultimately anticlimactic, all things considered.

Overall, “Graduation Day” is one of the more middling slashers of its era; it’s certainly not the worst, but it’s not among the best either. There are a few moments that are worth seeing for genre completists and fans, but the film generally feels uninvolving and stylistically lazy. I’d recommend fans give it a go at least once, but it’s one of the less memorable of its peers, and with good reason.