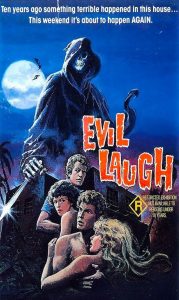 Some med students are having a get together planned by a close friend at some real estate he was interested in buying. It’s supposed to be a weekend of relaxation and fixing up the house. After the party arrives the host is missing and they hear a story about the house being haunted by a child killer that supposedly died 10 year prior to them being there.

I think this version I saw was heavily edited…and that really sucks because if some of the deaths were not cut, the rating would be higher. Anyhow, there’s still a cut out liver, slit throat, pelvis stab, axe in the head, microwaved head*, and the aftermath of all the murders. I must say the microwaving scene was outstanding. Pretty original and really fun to watch. Everything else was just average because it seemed heavily cut.

I can usually say quite a bit about the technical aspects, but in this case nothing was too wrong. The set was a little redundant, and the lighting was occasionally low…those were the main problems here. The camera shots were nice most of the time too. The terrible 80’s music was actually pretty fun most of the time. Oh, and the laugh was lame….

The acting as a whole really wasn’t that bad. In fact, the cheesy acting helped the movie out a whole lot. No one really stood out to me as really good or really bad. They were all on the same cheap, cheesy, mid 80’s horror movie level.