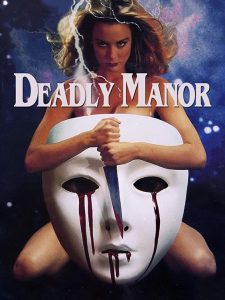 Director Joseph Larraz’s first venture into the slasher genre – Edge of the axe – was a fairly decent attempt with an interesting premise, plenty of gore and a likable if not immensely talented cast. I had high expectations for his second effort and hoped that the six-year gap between the two films had given him time to improve on his promising hack and slash debut. Deadly Manor was released during the ‘silent years’ of the slasher genre; a fair time after the boom of the eighties had died down and three years before Wes Craven revived things with his semi-parody, Scream.

Six youngsters head out on a camping trip deep into the wilderness where one of them knows of a beautiful lake. On the drive through the long winding roads, the group loose their way and pick up a mysterious hitchhiker that says he knows how to get to the area that they’re seeking. As the warm summer day gives way to a stormy night sky, the gang decides that they better find some shelter for the night. As they search the woodland for a place to settle, they come across an eerie derelict mansion shrouded by the darkness of the surrounding trees. Curiosities arise when they discover a car-wreck statue in the front garden that looks like some kind of bizarre shrine. On closer exploration of the premises they discover coffins in the basement and an array of photos of a beautiful woman. Although they feel uneasy, the weather has become unbearable outside and they realise that the only option is to stay for the night. Before long a masked psycho begins to brutally murder the kids one by one. But what is the reason for these ruthless unprovoked murders?

Wow, what a difference six years can make, is this really the same guy? Any credibility Larraz garnered from the positive aspects of his previous stalk and slash attempt has been completely shattered by this inane and ultimately yawn-inducing mess of a movie. He’s replaced an unknown cast – that at least showed potential – with actors so wooden, they make my neighbour’s picket fence look plastic. An interesting premise has been ditched in favour of a synopsis so asinine that you’ll cringe every time one of the dumb bimbos wanders off to their doom. Finally he seems to have strangely lost any sense of creativity or flair that looked so promising in his earlier work. Now I know that the ability to act convincingly is a skill that isn’t easy to come by. Of all the dramatic performances we see year after year, probably a mere 40% are worthy of further recognition. However, these guys are so flat it’s like they had lost a fight with a steamroller just before they turned up for the shoot. What the hell was wrong with them? Were they reading from a well-hidden autocue? I wonder what the cast themselves made of their performances when they watched them back? I’d love to find out. Did they think that the next stop was Hollywood’s walk of fame? Did they believe that the next movie would be the one that gets their first nomination? OK, so I’m being a little cruel. But look at it this way; I’m an awful shopper, so I stay well clear of supermarkets. These guys should have avoided any film making equipment in a similar fashion.

I must mention the set locations that were satisfactorily spooky for the most part and did at least create a credibly creepy backdrop. But even this positive sheen was ruined by the awfully inadequate lighting. The murders are mainly bloodless and poorly staged and if you’re watching this snooze marathon late at night, you’ll probably fall asleep during the long and boring character development that precedes the first lacklustre slaughter. Yes, if you suffer from insomnia then here’s a good alternative to sleep aids that will almost guarantee a cosy night’s rest!

Now I realise that it’s customary for a slasher victim to be as dumb as possible. It would be no fun if a young Einstein outsmarted the masked maniac at every turn, would it? Unfortunately these guys take the biscuit when it comes to stupidity. In fact they run off with the whole pack. It begins to get a little tedious after a while as they continue stating the obvious and overacting like Ashton Kutcher on speed.

There’s really not too much left to say about Deadly Manor. I could go on about the obvious plot holes that you could park a jumbo jet in, but I’ll save you the boredom of reading about them. The one thing that the movie has got going for it is a deep-rooted moral to its story. If ever you’re out in the woods and you discover an ‘abandoned’ house that has coffins in the basement, strange occult signatures garnishing the walls and human’s scalps lying around freely on the mantelpiece, then it’s a good idea NOT to just ignore these signs and think that they’re just ‘inspired’ décor. Instead you should realise someone with a severe mental impediment must be nearby and it’s a good idea to get in your car and head for somewhere else… on the double! This is utter trash I’m afraid and I thoroughly recommend you avoid it….