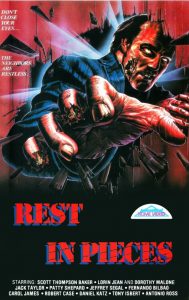 Back in the 70’s José Ramón Larraz was the director of some highly acclaimed exploitation masterpieces like “Vampyres”, “Symptons” and “The Coming of Sin”, but the respect and acknowledgment he obtained over the years abruptly came to an end during the 80’s, when his name got linked to reputedly cheesy and insignificant film such as “Edge of the Axe” and this “Rest in Pieces”. It’s quite a shame Larraz’ career died such a quiet death, especially because those two last movies are actually much underrated. “Edge of the Axe” was a grim slasher with a nasty shock ending and particularly this “Rest in Pieces” is an astonishingly pleasant surprise. Admittedly the title sounds silly (albeit enticing) and the still images on the back of the old VHS cover look extremely cheesy (and very 80’s), but it’s a truly imaginatively scripted movie with a constant macabre atmosphere, unexpected twists, creepy characters and countless of genuinely uncanny jump moments. Add to all that some awesomely gory massacres, gratuitous nudity and a wondrous sense of black humor, and you’ve got yourself an authentic horror gem of which I can’t possibly comprehend why it’s so scandalously unappreciated. Being the sole inheritors of a wealthy aunt who committed suicide live on video, a greedy young couple moves into her estate called “Eight Manors” and promptly begin to search for the hidden family fortune. There are, however, six more and highly suspicious behaving tenants on the estate are working against them. It doesn’t take too long until Helen begins to spot the eerie images of her nastily grinning aunt everywhere around the estate and she slowly goes insane. The script of “Rest in Pieces” obviously doesn’t make too much sense and totally lacks coherence, but who cares when there’s zombies, ghosts and mad-raving lunatics!?! I realize I’m probably being too generous here, but this is a seriously amusing film and it’s about time someone writes something positive about it.