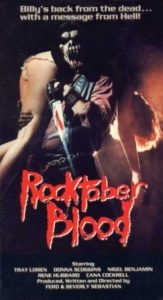 This is just another horror film that is really no better or worse than most of them made in the 70’s,and before. What makes this film interesting is the MUSIC done in the “on stage concert scenes and in the recording studio scenes” and not the acting or dialog or the production value. This is actually some of the best Horror film music I’ve heard,and I have heard a lot of it. The soundtrack to this movie was hard to find, BUT..I did locate one on E-Bay and it was well worth it. The musicians are professional on the LP,as they were apparently some L.A. studio guys from back then. It’s no surprise that the best part of the picture is the music done by professional players. After all…most movie soundtracks are done by pro players. Yes…The music on the LP does contain some movie filler tracks,but the concert scenes music in the picture are also included which makes this worth having. I felt the songs “I’m Back”, “Rainbow Eyes”, “Killer on the Loose” and “Watching You” are really better than the picture.

0 50
Stranger Things….Nostalgia And The Millennials