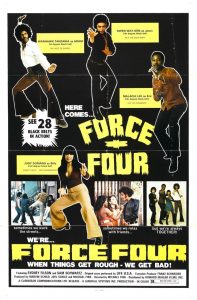 WOW! They don’t come more incompetent than this. A Blaxploitation flick where four karate experts are hired to retrieve a stolen African witchdoctor fetish doll. The entire movie consists of them getting the job, asking people where it is, kicking people when they don’t know, locating it at crime boss Z’s house, Z getting away, them finding Z at his other house and taking it back. This is absolutely amazing film-making because nearly every scene is dubbed with actors just laying down the lines regardless of whether their mouths are moving or not. The film features real martial artists with credits stating their black belt degree. It boasts that no effects outside of slow motion were used but this looks like something Rudy Ray Moore choreographed. Fans of Warhawk Tanzania (DEVIL’S EXPRESS) might want to check this out because he is the second lead Adam. He delivers the film’s one (yes, one!) awesome slo-mo kick. Tanzania’s EXPRESS co-star Wilfredo Roldan also appears sporting the same Rodan moniker but this time he is a thug. Amazingly, director Michael Fink got one more film out the following year called VELVET SMOOTH. Even more amazing, he went on to become a top of the line visual effects supervisor on films such as TANGO & CASH, BRAVEHEART, X2 and CONSTANTINE (I am not kidding!). Platinum Pictures’ VHS release has a guy on the front holding a machine gun and the back claims a team “armed to the teeth” recover the idol. Not a single gun is in film. Such a scrupulous company they then released the unrelated BROTHER ON THE RUN (1973) as BLACK FORCE 2!