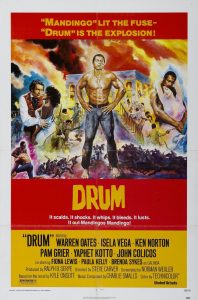 This was the so-called sequel to “Mandingo” and its not really a sequel but another excuse for exploitation which can be fun to watch. Ken Norton is “Drum” and he can’t act to save his life but his physique is so impressive and also the fact that he was a famous boxer that had beaten Muhammad Ali gives the viewer some curiosity to watch him. Warren Oates plays Hammond Maxwell and Perry King played him in the first film and its impossible for him to play it but thats only if you use logic. Oates does add some respectable acting to the film and he chews up the scenery with gusto. Oates says lines like, “My bucks got to have intercourse, the saps a risen'”. Pam Grier is Regina and she’s Oates bed wench. Grier has a topless scene but has very little else to do in this film. Her part is very underwritten. Yaphet Kotto is Blaise and he gives probably the best performance. I’m not sure if Kotto did this film for the money but if he didn’t, he should have known better. He does his best to portray an angry slave who talks of freedom in his heart. “B” movie icon Rainbeaux Smith plays Oates daughter Sophie and she has the hots for the bucks and if they don’t cooperate then she screams rape. Smith is enjoyably bratty in this role and its the type of role she spent most of her career playing. She always brought that something extra to a role. Film is shameless in its subject matter. It has gays, lesbianism, naked prostitutes, spankings, fights, slave upheaval, and of course all the actress’s get undressed. “Drum” was produced by Dino De Laurentiis and its another cheesy production from him. What can you expect from a man who dared to remake “King Kong”