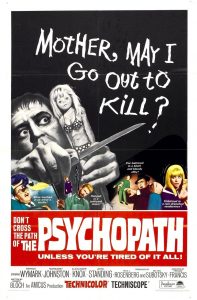 Cinematographer and Director Freddie Francis who is best known for his work at Hammer Studios in Britain, (a classy outfit that remade the Universal Horror classics with verve and in color and produced some of the most remembered movies of the 50’s and are Baby Boomer favorites), was behind the camera on this one.

With the help of Psycho (1960) author Robert Bloch, they went into familiar turf here with this little seen, and slightly disappointing, entry.

It does look pretty good and has some creepy setups, but suffers from some poor editing (some say it was re-edited after initial screenings) and a bit of a talky atmosphere. The ending is memorable and it is worth staying for the denouement, it just takes its time getting there and is clumsy at times, but not at all to be dismissed.