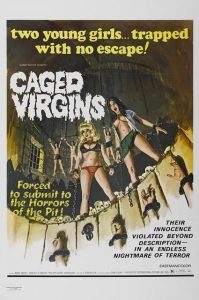 This is not Jean Rollin’s best film, but it might be his most essential one for fans because it combines the moody visuals of films like “Fascination” and “Two Orphan Vampires” with the perverse softcore sex of films like “Bacchanales Sexuales”. Two teenage virgins run away from a school party (which in the strange Rollin universe somehow involves dressing as clowns, having a shoot-out with police, and disposing of the body of their dead male accomplice in a burning car). After a bizarre accident while walking through a graveyard that almost results in one girl being buried alive, they arrive at a deserted castle and do what any two virgins would do in a 70’s Eurohorror/sex movie–strip off all their clothes for some hot lesbian action. Soon though they meet the occupants of the castle who are, of course, vampires. Freely rewriting the vampire rulebook, Rollin’s vampires in this movie can not pass their curse on to anyone except virgins. Any non-virgins are chained to the wall while the monstrous man-servants have their way with them in gratuitous sex scenes before the female vampire suck their blood from their breasts and the male vampire changes into a bat to commit an act of bestiality that no pervert in the world would find erotic (you have admire the sheer audacity of Rollin if nothing else).

The conflict happens when one girl decides to lose her virginity while the other decides to preserve hers and join the ranks of the living dead. But the bonds of love and friendship are not easily broken. This movie addresses some real themes of coming-of-age and friendship (albeit in a fantastical and at times ridiculous milieu), but no one will confuse it with “Buffy, the Vampire Slayer”. If you’re looking for sex,on the other hand, you certainly won’t be disappointed, but unlike all the erotic vampire movies they churn out these days, this is a vampire film with a lot of sex, not a sex film with vampiric trappings. And there is something very personal and obsessive about Rollin’s films that the modern-day hacks can never hope imitate. This movie contains all manner of memorable images–preserved human arms holding candles, posed skeletons dressed in clerical robes, a girl in a mini-skirt lying on a coffin being buried alive by oblivious gravediggers, a girl clamoring around the ruins of a Gothic castle dressed in nothing but knee socks. Good or bad, Rollin is definitely a one-of-a-kind filmmaker.

0 19
Movie Promotions At The Comic Con In India