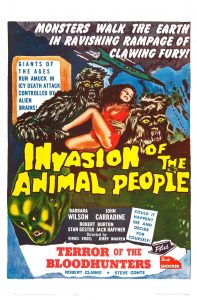 Actually it’s a Swedish-American collaboration. A spaceship (that looks VERY much like a meteor) crashes in Northern Sweden before the eyes of some Samis. Some people, including the young geologist Erik Engström and the American Dr Wilson, travel up to a village in the vicinity to take a look at the ship – and Dr Wilsons beautiful niece Diane. At about the same time the aliens (who never speak, but sound kinda like synthesizers) release their pet – a hilarious, 3 metre high, furry monster with ridiculous teeth (you’ve got to see it for yourself). I guess you get the picture. Without spoiling any of the fun I can say that the rest of the story involves wrecking of Sami villages, a totally uncalled-for nude scene (well, almost) , and a love affair (WHO could it be between?). This is a 50’s monster turkey with real class, it has all the cliches and very few dull moments. If you watch it until the end, you get to see a visual effect that is BY FAR the worst one I’ve ever seen.