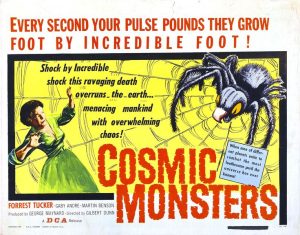 “The Strange World of Planet X” (British, 1957; usually shown as “The Cosmic Monsters” on American TV) has been one of my favorites for many years. It’s been said that films of this type don’t appeal to anyone except the public, since they’re usually despised by critics, but I found this film great scary fun to watch (throughout many repeated viewings) as well as a good example of how a low budget can be stretched. The performances are sincere; Forrest Tucker is his reliable self as the hero, and I particularly admired the performance of Martin Benson as “Mr. Smith”, a benevolent visitor from afar probably inspired by Michael Rennie’s “Klaatu” character in 1951’s “The Day The Earth Stood Still”. The film builds suspense quite well, and there are suitably harrowing scenes involving giant insects. This originally played American theatres as a double feature with another nifty British chiller, “The Trollenberg Terror” aka “The Crawling Eye”, which also starred Forrest Tucker.