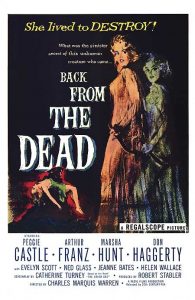 Divinely silly, I use that adverb with great relish, since this film has the sensations of a silent film without the creative know-how. It seems to be striving for every emotion mankind has ever known, jotting each line in the screenplay with such self-enthused joy like a dog with a brand new bone. It’s one of the rare horror/supernatural films to deal with devil worship, showing what a presumed ritual murder would look like and how one disposes of the body. But when the evil dead returns to life, it’s in the body of the widower’s second wife, and oh what a gloriously over the top performance leading lady Peggie Castle gives, glaring malevolently as the dead woman enters the soul of the ailing living.

You have to give the writer credit. They strived for melodramatics and what they ended up with might give you laughs like those cheap old British horror movies with Tod Slaughter. Marsha Hunt is sincere and strong as the possessed woman’s sister, with Arthur Franz the confused widower and Helen Wallace totally over the top as the dead woman’s Satan worshiping mother. Melodramatic music, creepy photography and a lack of actual horror makes this all the more spooky. But it appears to be so smug with itself that I ended up finding it more of a parody than a forwarding of actual evil that might be surrounding me. Some hints of cruelty are really difficult to watch, particularly Castle heading to a leashed up dog with a machete.