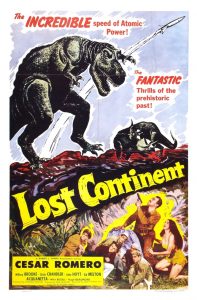 An atomic rocket crashes atop a lofty plateau on a South Sea island, a plateau where dinosaurs still survive. Three military men and three scientists climb to the top of the plateau and struggle through the savage environment to recover important data from the rocket. The cast consists of B-movie sci-fi veterans: Cesar Romero (“The Jungle”), John Hoyt (“Attack of the Puppet People”), Hugh Beaumont (“The Mole People”), White Bissell (“The Time Machine” and others), Hillary Brooke (“Invaders from Mars”), Sid Melton (“Captain Midnight”), and a bit part by Acquanetta (“Captive Wild Woman”).

The jungle sets and tabletop miniatures bear a pleasing resemblance to a poor-man’s Skull Island (misty and surrealistic). The special effects during the climactic earthquake are nicely done. The cast does a fair job with Richard Landau’s script. Admirable music by Paul Dunlap. Directed by Sam Newfield.

In spite of these assets, the film is defeated by a low budget and the poorly done animation (the credits do not name the animator). Only two triceratops, one brontosaurus, and one pterodactyl are shown. The dinosaur models lack detail. “The Lost Continent” came out early in the sci-fi craze of the 1950s, before any of Harryhausen’s movies. The producers didn’t realize how hungry the public was for rampaging stop-motion monsters.