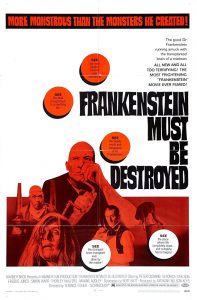 Frankenstein must be Destroyed is one of the best of the hammer horror series; and that is saying something, as the studio has produced a lot of horror highlights. Peter Cushing stars as Baron Frankenstein, the mad doctor whom everyone and their dog will recognise instantly from the classic novel. This film is an interesting variation on the classic story, and it sees Baron Frankenstein involving himself in the practice of brain transplant surgery. The film doesn’t have anything to do with the classic novel; it doesn’t make reference to it at any time, and it’s only notable similarity to that from which it is based is the character of Baron Frankenstein. Saying that; it doesn’t really matter, as this film stands on it’s own from the original story.

The character of Frankenstein has been changed a lot from the one that we all know and love. The original Frankenstein was an over-ambitious scientist that got in over his head and later found redemption. The one here, however, is pure evil. He has no remorse for any of what he has done, and he treats murder only as an obstacle that is in his way. He is cold, calculating and overall; not a nice man. The story really takes off when Frankenstein blackmails Karl, a young scientist, into helping him perform the first brain transplant. The two kidnap Dr Brandt, a fellow mad-scientist who has gone insane and is being held in a mental asylum. A lot of the film’s horror is drawn from the character of Frankenstein, who is expertly portrayed by Peter Cushing.

Peter Cushing is a great actor, and is more than up there on the illustrious list of horror legends. He’s not as pronounced as fellow legend Vincent Price, or as malevolent as fellow legend Christopher Lee; but Peter Cushing has a niche all of his own. His persona is extremely creepy, especially in this film. He’s not evil like you would imagine evil to be; he has a much more intelligent, more calculating presence; and that is far more scary than any man in a monster suit. Peter Cushing’s screen presence is in his authority; he isn’t a big and strong man, but he’s not the sort of person that you would want to upset because you just KNOW that something bad will happen to anyone who does. The acting in Frankenstein Must be Destroyed is surprisingly good, actually; from Hammer films, you don’t tend to expect great acting, but this one delivers. Simon Ward stars (almost!) opposite Peter Cushing as the young scientist blackmailed by Frankenstein. He’s definitely second fiddle to the awesome Peter Cushing, but he performs admirably. Freddie Jones is the real star besides Cushing; although no Boris Karloff, his performance as the man turned into a monster is perfectly tragic. Veronica Carlson is the lady of the film, and she does just fine; and some credit must go to Thorley Walters, too; the man that plays the hazardously idiotic police inspector.

The ending of the movie is great, and draws parallels with that of the original novel, in that it’s exciting, flame-ridden and everyone gets their comeuppance. Credit must go to Terrence Fisher; he has directed a number of Frankenstein (and Dracula) films, and following up on a classic novel and doing it well is no easy feat. Frankenstein Must be Destroyed is a horror highlight, and a must for fans of the genre.