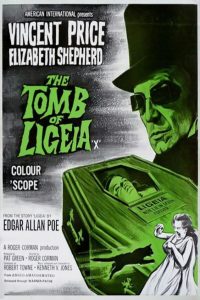 “The Tomb of Ligeia” was one of a cycle of films made by Roger Corman in the sixties based on the works of Edgar Allen Poe. Verden Fell, an English country gentleman of the 1820s has become obsessed with his dead wife Ligeia. Indeed, although she has been buried in a tomb he built for her, he believes that she is not dead but has, as she promised she would, survived death in some form and will return to him. This obsession survives Fell’s remarriage to Rowena, the daughter of a neighbouring landowner. Indeed, his obsession worsens, as he comes to believe that Rowena is possessed by Ligeia’s spirit.

This is an unusual horror film in that much of it takes place not only outdoors but also in daylight. The sort of images of ruin and decay traditional in horror films- Fell lives in a gloomy, crumbling, cobwebbed manor house close to the ruins of a mediaeval abbey- are contrasted with sunlit scenes of the beautiful, verdant English countryside. The difference between life and death is the central idea of the film- which ends with a quote from Poe himself: “The boundaries which divide life from death are at best shadowy and vague. Who shall say where the one ends and where the other begins”- so this contrast is possibly symbolic, with the outdoor scenes symbolising life and the indoor ones death. The two main female characters (both played by the same actress, Elizabeth Shepherd) are differentiated in a similar manner. Rowena is a healthy-looking, “English Rose” type blonde with a love of outdoor pursuits, especially hunting. Ligeia is dark haired and gaunt with an unhealthy pallor.

Like many films of this period, and unlike later films such as “The Exorcist”, this is an example of an understated horror film, with the horror mostly being implied rather than shown directly. Ligeia makes an appearance in the film, but we are never sure whether this is really her ghost returning from the grave or a hallucination conjured up by Fell’s distraught mind. Although it is understated, however, it is genuinely frightening, not because of Exorcist-style special effects, but because of the eerie mood that Corman is able to create. Apart from the atmospheric setting, various objects take on a sinister significance- a bunch of flowers, a dead fox and, most of all, a mysterious, malevolent black cat which may be the reincarnation of Ligeia’s soul, or may be just a cat.

The acting is also very good, especially from Shepherd in the dual role of Rowena/Ligeia and from Vincent Price as Fell. In a way this is also a dual role, as there are two separate aspects to Fell’s character. On the one hand he is sinister and frightening, the man who threatens Rowena’s happiness, her sanity and even her life. (The adjective “fell” significantly means cruel or fierce). On the other hand he is a pitiable character, a victim of his own obsessions and (possibly) also of his late wife’s ghost. This duality is very much in keeping with the mood of the film, which is one of ambiguity and doubt. As befits one based upon the work of Poe, it is a tale of mystery and imagination