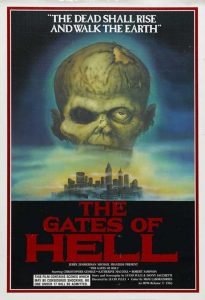 A priest commits suicide in order to open a gateway to hell. This leads to a series of grim events, including several supernatural zombies.

City of the Living Dead is the second of Italian director Lucio Fulci’s four celebrated zombie films from 1979-81. Each and every one of them was primarily famed for its graphic violence. In the case of City of the Living Dead it is most probably two gruesome set-pieces in particular that have established its infamous reputation – a nasty scene where a man is killed by a power drill through his head and a sequence where a woman vomits up all of her innards. Both are memorably grotesque. Add to this a maggot storm and several moments where zombies pull the brains out of their victim’s craniums. Like other Fulci pictures of this period, this is an inventively grotesque film. But also like those other movies there is also a sustained creepy atmosphere. The fog encased town of Dunwich is quite an effective setting, while the Goblin inspired score from Fabio Frizzi adds a gloomy ambiance of dread to proceedings. There is also a notable macabre scene that doesn’t involve any blood and guts, where a woman who has been buried alive is freed by a man hacking her coffin open with a pick axe, which just misses her head several times.

Lead actor Christopher George will be familiar to a few fans of early 80’s splatter flicks from his lead role in the bonkers Spanish slasher Pieces. He’s pretty decent here again. But, ultimately City of the Living Dead is a film most notable for its no-holds-barred gory violence and horror atmosphere. Although it is not among Fulci’s best films, it’s certainly a key entry in the Italian zombie film cycle of that time.