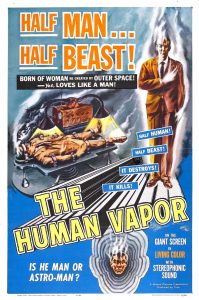 Ishiro Honda is best known for his Kaiju films, which is rather a shame because he made many other fine and creative movies. This scifi/horror mix a good example of one of his more intimate, darker and multilayered creations and is to be recommended to old-school fans of these genres.

The scifi/monster elements in this film are a variation on H G Wells’ Invisible Man, although our protagonist/villain is more complicated and more tragic than Wells’. The protagonist in this film uses his superhuman powers to rob banks and finance the come-back of a Noh dancer who is recovering after a recent stay in a sanitarium, and there are a number of scenes with her dancing and wearing traditional garb…these scenes are in contrast to the eponymous protagonist, who wears a business suit and participates the sordid business of crime. Yet our protagonist loves the dancer and the dancer appears to at least partially reciprocate.

In the hands of a lessor director, this material could become boring and maudlin, yet this film is moody, suspenseful, and there is a haunting sense of impending tragedy that is maintained throughout. Certainly our protagonist has become unhinged, and there are hints that the Noh dancer may also have been at the sanitarium for mental health problems. So then, this film presents us with mix of madness, art and science fiction that is interesting on several levels…not the least of which is the love story between a fragile artist and a homicidal lunatic.

In a strange way, this film has many of the same themes as the 2010 pseudo art house flick, ‘Black Swann,’ yet is more deft and has more depth.

The FX, while clearly belonging to the world of 1960, are creative and tell the story, and contribute to the coherent mood of this film. The American version has been edited badly, but still conveys the major meanings. I recommend this to fans of old-school horror and scifi, and to those studying the work of Ishiro Honda.