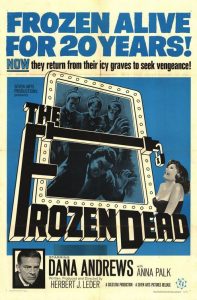 The creator of IT! (1966) also made this preposterous but slightly more enjoyable precursor to the “Nazi Zombie” sub-genre earlier that same year and, funnily enough, I came across both these hitherto rare movies almost simultaneously from different sources…which is why I ended up watching them back-to-back. Actually, THE FROZEN DEAD had previously been available on a low budget DVD double-feature with the similar (but clearly crazier) THEY SAVED HITLER’S BRAIN (1963) that soon went out-of-print – so I am certainly glad to have stumbled upon the former via alternative channels that, curiously (since I have no recollection of it ever being shown on Italian TV in the past 25 years), sports a second audio track in Italian (which, ironically, is much cleaner than the garbled original)!! Anyway, THE FROZEN DEAD stars waning Hollywood star Dana Andrews (sporting an inadvertently amusing German accent that, together with his silent ‘r’ pronounciation, makes him sound as if he is slurring his lines…and, being aware of his past battles with alcohol, I wonder!) as a former Nazi scientist who has, since the end of WWII, relocated to a large estate in the English countryside to conduct revivification experiments on 12 cryogenically frozen top Nazi officials (including his own brother Edward Fox)! In fact, the latter’s anguished cries open the film as 8 of these subjects are shown to have failed in regaining their normal mental capacities and, consequently, are treated much like unwanted pets, taken out for their daily stroll by Andrews’ whip-wielding assistant Karl (Alan Tilvern). Karl’s own zeal and blind faith in the Party has made him (unwisely, as it turns out) invite his impatient superiors to witness Andrews’ non-existent breakthrough with his first ‘success’: a hulking, bald manservant named Joseph. To complicate matters further, 3 innocent bystanders (Andrews’ niece, her ill-fated best friend, and Andrews’ younger colleague) soon take up residence in Andrews’ mansion, obviously unaware of the sinister goings-on beneath in his secret laboratory or his past political affiliations. Ever eager-to-please, Karl impulsively injects the visiting friend with a mortal substance – and has Fox strangle her for good measure! – so as to provide the disillusioned Andrews with a live brain specimen for him to study (in an attempt not to muck up any more of the remaining frozen dead)! A complex charade – that also involves Karl’s facially-scarred secret female relative who lives nearby – is set in motion to appease Andrews’ niece from worrying for (or delving deeper into) her friend’s sudden disappearance…but this does not stop the niece from finding out about the former within hours! The young scientist – who, naturally, has fallen for the niece on first sight – is in on the friend’s murder (since he was brought here specifically to help Andrews successfully complete his experiments) but only decides to do something about it following a couple of failed murder attempts (courtesy of the increasingly demented Karl) on the niece’s person! Ever the dedicated sadists, the 2 Nazi superiors (who seemingly appear and disappear at the mansion at random) torture Karl for his clumsiness and force Andrews to throw him in with the frozen dead for the ultimate punishment! The last (and most outlandish) pieces of the jigsaw puzzle to be found in this lurid shocker are ‘the living head’ – belonging to the niece’s friend, of course, within which resides the all-important live brain…although Andrews is never shown doing much with it – apparently dreading her scowling countenance! – and the remarkably Cocteauesque wall of severed arms – whose real use is never fully explained (unless some of the frozen dead had been maimed or something) but their potential is certainly not wasted when, in the film’s climax, the head telepathically (don’t ask) fatally wraps them around the necks of Andrews and the older of the Nazi superiors (Karel Stepanek)! The very last shot of the film, then, has the head pleading with the surviving niece and her doctor companion to give it that much-denied burial! 2 final things: director Leder must have seen the works of horror maestro Tod Browning one time too many because, both here and and IT!, he displays the latter’s frustrating knack of cutting away at the most inopportune moments and having much of the key action take place offscreen!; besides, while the version I acquired came from an open-matte color print (making the boom mike clearly visible a couple of times!), the film was apparently originally released to theaters in black-and-white…which, I suppose, must have robbed the living head of her creepy bluish pallor!

0 151
Sharknado: the most terribly good movie of the summer