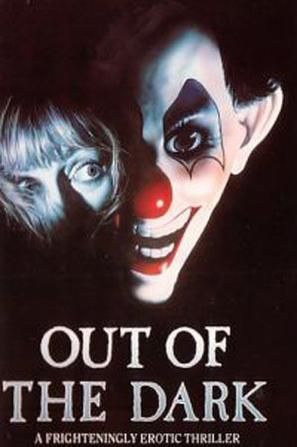 I for one was always a watcher of B suspense horror flicks and the 80’s produced some good ones the way they were done with sex, skin, and guessing suspense. I just recently viewed this one little gem called “Out of the Dark” and it’s a watch as it will pass a late night. The setting is in the city of angels L.A. and the beautiful up and coming women who want to be movie stars first work the lines of a high priced and stylish phone sex service. And suddenly one by one each of the ladies start to be brutally murdered. So the questions begin is it a crazy client or customer? The film’s theme of suspense and doubt is well showcased as it shows many crazy characters from the company accountant to the ladies current picture taker to a washed up alcoholic photo man. Oddly and in a strange way with each murder the killer hides behind a creepy clown mask! Aside from this suspense thriller being entertaining and a cat and mouse game of a psychotic killer it features work of veteran B movie queen Karen Black as the owner of the phone sex service line. And look for character actor and Jack Nicholson buddy Tracey Walter as the police Lt. that investigates the murders. Overall good little B movie treat.