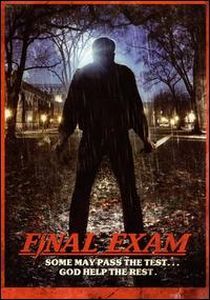 I really enjoyed this unoriginal and very predictable slasher flick. The movie revolves around a couple of students who still haven’t finished their final exams that soon come to realize that a mad serial killer is on the loose. This is, as you can tell, not original at all. In fact, this might be one of the least original slasher films ever but it sure is an entertaining one. The movie is very fast-paced and even though very few of the characters are likable, you don’t want them to die since every character adds something

I didn’t have expectations while watching this movie after watching the dull and disappointing “Graduation Day”, but I was pleasantly pleased with this movie definitely one of the better 80’s college slashers. Cecile Bagdadi (Courteny) played the female lead really well, Joel S Rice played Radish with real depth as did the other cast Wildman, Janet, Lisa, Mark and Gary they all played they’re parts really well.

All in all Surprisingly entertaining slasher flick which isn’t nearly as bad as many people make it out to be. It’s relatively fast-paced and makes one and a half hour pass by pretty quickly. It won’t win any prizes for being original but it’s still a decent movie so I’m going to go ahead and recommend this one, but only for slasher fans.

0 64
Blowing In The Wind Of Chernobyl