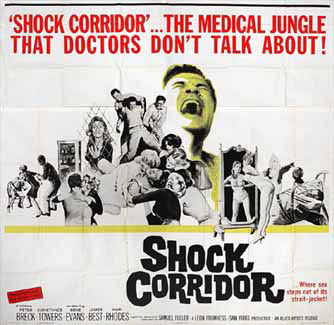 To describe SHOCK CORRIDOR as lurid would be an understatement: it plays like something torn from a supermarket tabloid. An ambitious reporter feigns madness and has himself committed to an insane asylum in order to investigate a recent and unsolved murder–and once inside he encounters everything from hateful attendants to a whole ward of crazed nymphos, and all the characters are presented in the most explotational tone possible.

But SHOCK CORRIDOR has a lot more going for it than just lurid exploitation. Director-writer Sam Fuller was renowned for his gutsy, no-frills, straight-to-the-point style, and in his hands SHOCK CORRIDOR becomes a vision of America as a society that places so much emphasis on conformity and success that people crack and go mad under the strain. And Fuller’s cast is remarkable: even when the story goes ridiculously over the top, they perform with such sincerity, conviction, and realism that you can buy into the story in spite of its improbabilities.

SHOCK CORRIDOR will not be to every one’s taste, but even those who dislike it will probably find themselves grudgingly fascinated by the film, and although the film transcends such labels fans of explotational and cult cinema will also find lots to enjoy. A classic of its kind. Recommended… but don’t say I didn’t warn you.