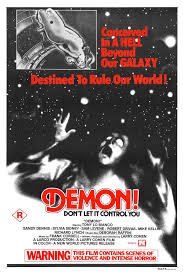 One afternoon in NYC a sniper on top of a high-rise buildings water tower opens fire on the people milling down on the city streets. With uncanny accuracy he guns down fifteen people. Det. Peter Nicholas, Tony Lo Bianco, climbs up the water tower and tries to talk to the sniper Harold Gorman, Sammy Williams, on why he did this horrible act and also tries to get him to give himself up. Harold calmly tells Det. Nicholas that “God told me to” and then jumps to his death from the tower.

Troubled over the sniping incident Det. Peter Nicholas, a very religious man, tries to rationalize why Gorman would do such a thing and at the same time try to connect God to it. Thinking that there’s more to the incident then what the official police report says, that Gorman was insane. Later another man does the same thing that Gorman did. John picks up a knife and goes down to the supermarket and stabs to death a number of people before he’s shot by the police. When Peter talks to him in his hospital room he tells him the same thing that Harold did: “God told me to”! There’s something very strange and mysterious behind these killings but nobody seems to know what it is?

At the eve of the Saint Patrick’s Day parade the police get a phone call telling that there is going to be a shooting where five policemen will be killed and the shooter will be one of their own. Not having the time as well as being able to stop the parade sure enough a cop marching in the Saint Patrick’s Day parade, Andy Kaufman, goes berserk and opens fire on his fellow policemen and kills five of them before he’s shot to death himself. As he’s dying the insane cop says the same thing that the other two mass murderers said “God told me to”. Det.Nicholas finally loses it when he comes upon a person who murdered his entire family and when questioned about why he did it he tells Peter that he was told by God to give him back the family that he gave him and how could he refuse?

The police connect the killers to a young man that they were seen with just before they went on their rampages. Finding out his name Bernard Phillips, Richard Lynch, and where he lives Det. Peter Nicholas feels that Bernard is somehow involved in the killings and then goes to his apartment to interview him about them. Attacked on the stairway by Bernrd’s mother Mrs. Phillips who tries to stab Det. Nicholas she instead ends up stabbing herself! Again as Mrs. Philips is dying she tells Peter that same haunting reason for her actions :”God told her to”.

Det. Nicholas feels that the Phillips’ are the reason for these killings and goes to track down how this whole nightmare started! This takes Peter back to when and were this horror originated in Cape Cod and Jersey City some twenty five years ago in October, around Halloween, 1951. The story that Peter uncovers is a link to what happened then in 1951 to what’s happening now in 1975. Even more disturbing is that Peter has some connection, in fact blood related, to who’s responsible for those horrific murders!

Tony Lo Bianco gives one of his best performances as Det. Nicholas with Deborah Raffin and Sandy Dennis, Casey Foster & Martha Nicholas, as the two women in his life. Both Casey & Martha sense during the movie that Peter’s strong religious convictions were more then what he would normally have developed from his very strong Catholic upbringing. The scene with Det. Nicholas and Elizabeth Mullen, Silvia Sidney, the mystery women in the film who’s the key that unlocks the door to Peter’s most frightening suspicions is packed with so much power and emotion that it leaves the viewers almost out of breath and gasping for air.

Finding out the truth and finishing some unfinished business in a Harlem pool hall, with a cop-killing drug dealer, the ending to the movie seems a bit confused when Peter has it out with the mysterious and elusive Bernard Phillips. The movie by then already went as far as it could by stepping on too many toes in regards to it’s religious angle, without being cut or censored, and thus it’s obviously contrived ending.

To stop the killings Peter ended up becoming what he so strongly tried to stop: A religiously homicidal lunatic. Peters last words to the press, as he was led away in handcuffs, were what haunted him throughout the entire movie :”God told me to”. Defiantly not for everyones tastes but the movie does hold one’s interest from start to finish in regards to its thought provoking subject matter.

Religious fanaticism depicted in the movie may have been considered unreal and over the top back then in 1975 when “God Told Me To” was released. But with what’s been happening today in the Middle East and beyond, in regards to religious inspired terrorism and murder, the movie doesn’t seem that far fetched at all!