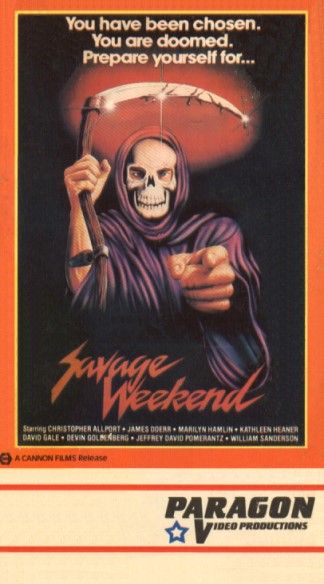 Five people take a trip to a backwoods community where one of them is restoring a large boat, the ownership of which is a matter of considerable anger on behalf of local yokel Otis (Sanderson) whose father, and the original owner of the boat, has recently died. Otis is “none too pleased” that city folk are taking away his blood, sweat and tears and he plans to get even. Meanwhile, promiscuous Shirley (O’Heaney) sunbathes naked, has random sexual encounters with Jay (Goldenberg) while the new boat owner (Doerr) and his girlfriend Marie (Hamilin, essentially the central character) are also indulging their carnal desires at every given opportunity. Flamboyant queen Chris Allport minces about, making salads and peeping lustfully as the two couples cavort, all the while Otis is plotting his revenge by his late-father’s grave-stone.

It reminds me of a poor man’s “Deliverance” in some respects and while at first glance, the cast may be unfamiliar, many of the faces are recognisable. Sanderson, Allport and Pomerantz have become better known actors, while Gale (pre “Re-Animator”) appears in an early role as the sinister-looking Mac, all-purpose local man who could be a hero or a villain. Despite these names, it’s Caitlin O’Heaney’s presence that really emboldens this low-budget slasher flick. Light years before “Tales of the Gold Monkey”, the brassy brunette is like a divine nymph and between Allport’s colourful peacock like performance, the two make an odd yet engaging pair.

If you can overlook the moments of despair (Hamlin’s cow-milking scene or the irritating banjo music spring to mind), there’s enough material in this low-budget shocker to make it worthwhile. And while the climax descends into little more than a killing spree, it’s energetic, gruesome and the plot twists satisfying. I watched this film many years ago and found it underwhelming, but on second more recent viewing, there’s more depth in the cast and sub-text than perhaps initially meets the eye.