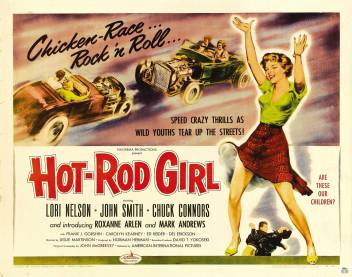 A humane cop works at converting troublesome teens from street racing onto supervised dragstrips. But then a new guy, a street outlaw, comes to town and stirs the pot.

The movie’s title is something of a misnomer. Actually, our hot rod girl operates a clipboard rather than a road racer. But that’s okay, since Lori Nelson is—surprise, surprise—very pretty, and even a good actress, to boot. Focus shifts about half-way through from the teens to cop Chuck Connors as he tries to shift street racing to the less dangerous drag strip. At 6’6″, he’s clearly an imposing presence that commands audience attention. There’s also a good look at young Frank Gorshin (Flat-top), who comes through with some badly needed snap. He’s also a very distinctive presence and clearly on his way up the show-biz ladder; he even does a couple brief Cagney bits. Too bad he wasn’t cast as the outlaw where he could have shown his talents as a sneering villain (e.g. The Riddler).

No doubt much of the theme is familiar to teens of the time when a guy’s status could depend on how close he was to a fast car, preferably a ‘hot rod’. The movie itself is fairly routine, longer than needed, and without much drag strip footage. Overall, the results lack needed drama, as when the two collisions are only implied and not shown. Maybe the staging was just too expensive for a budget outfit like Nacirema. Then too, actor Smith comes off as too bland to inject his nice boy Jeff with much personality. All in all, the movie’s a drive-in programmer with a provocative title minus anything more.