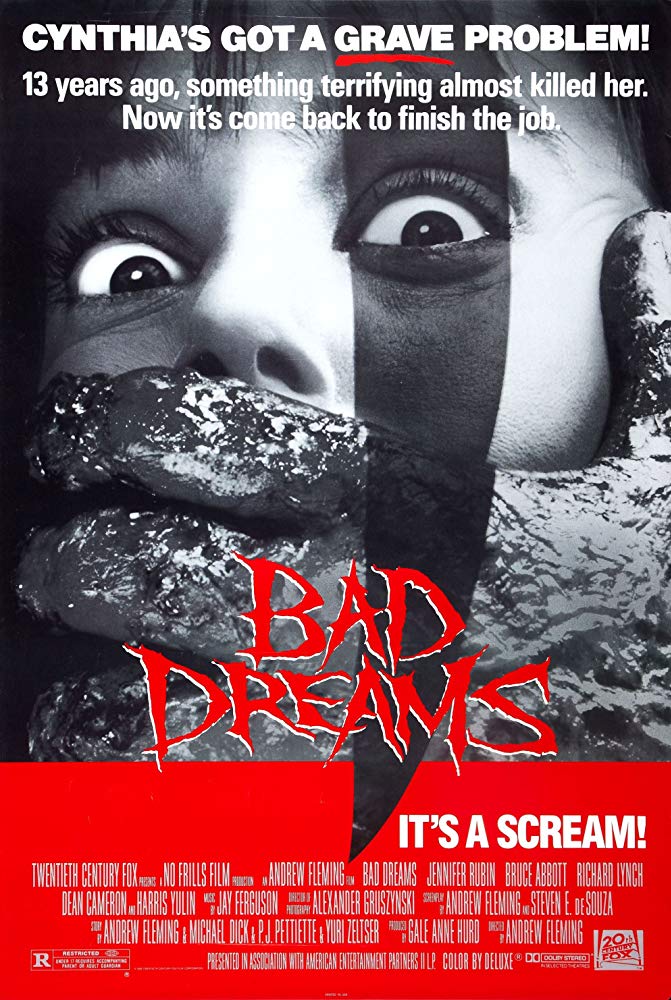 After barely escaping crazy cult guru’s (able Richard Lynch) fiery suicide pact, Cynthia (the very gorgeous and likable Jennifer Rubin) finds herself awaking 13 years later, in year 1988. Trying to get on with her life, she starts to realize that her fellow patients in the mental hospital start dying in brutal ways, and start seeing hallucinations/dreams/visions of Harris, the burnt up cult leader. Is he back from the grave, vowing revenge for Cynthia’s survival, or is something more sinister going on? Rather then going the cliché way in my review and bashing this movie for its direct influences from A Nightmare on Elm Street 3, I’ll just say that they never got in the way of my enjoyment of this film. A lot of movies rip off others all the time, so I don’t seem to ever get annoyed by these.

The film has top notch production values, a very entertaining cast, and some warped out death scenes. You can see how the movie just wants to be a good thriller and does so almost effortlessly. I remember my dad buying a old VHS copy when I was 9 or so and not really liking it’s cover, but since I didn’t want to hurt my dad’s feelings I stuck it up and pretended to be excited, and watched it, and ever since then I have a place in my (movie watching) heart for this, perhaps just based on that back story alone.

One thing that I really enjoy is the actors. Lot’s of familiar and likable faces in the house. I invested more into the movie by that way. I do admit the characters of the mental patients aren’t fully developed enough though, I wanted to know more and see more about them, like the very sympathetic Lana (played quite well by Elizabeth Daily). She has a scene where she opens up her heart and I started liking her, but the movie is quick to get to the gore and kills and her plight is cut way to short. Same could be said for Dean Cameron and Susan Barnes.

The directing by Andrew Fleming is basically there to serve the story, nothing to stand out. I would have preferred to see a director with a more unique visual voice (all of the Flemings movies never have stand out visuals) it would have made the movie more stand out, and his angles are pretty bland. Good scene transitions though.

The soundtrack by Jay Ferguson was much appreciated and quite dreamy. Far better then his over the top attempt with Nightmare 5: Dream Child.

The kills and gore are very queasy, and people who have dealt with a suicide or (god forbid) seen a suicide will surly be offended by this movie, but since I’m a avid horror fan I was never offended, but they certainly had cruel streak.

Some flaws that hurt the movie are the lack of character development (as stated) and the movie’s ending felt rushed, forced, and cut short. What happened to our survivors? I hate endings that never show the characters reactions after the events are over. One thing I will compare to Nightmare 3 is the ending, which was done there was well. Please take at least 4 or so minutes to better resolve our characters. The “surprise” in the end wasn’t fully explored either, it somewhat didn’t make much sense to me. What is this persons final goal when he succeeds? So maybe because I didn’t want to hurt my dad’s feelings at an early age, makes me warm up to this easier, or maybe it is just decent effort that can be watched from time to time. But be warned, this movie deals with suicide in a crude manner and surely will offend some.