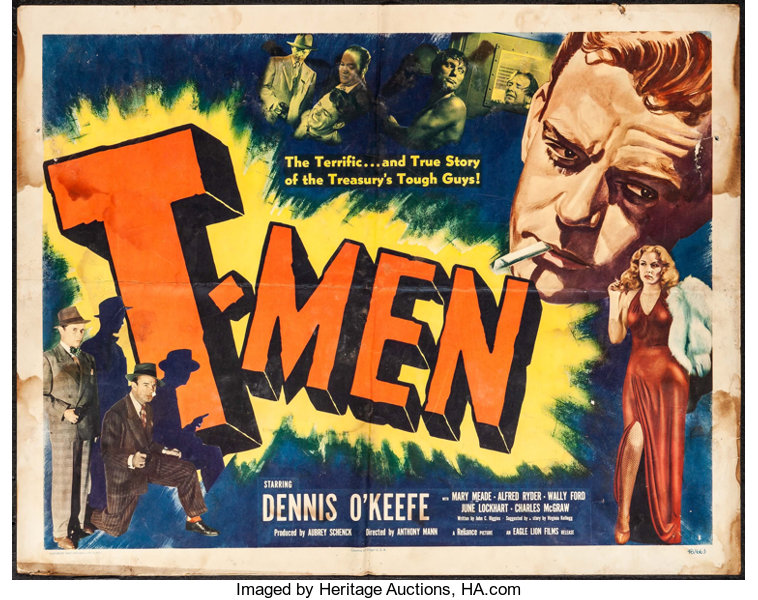 T-Men is directed by Anthony Mann and adapted by John C. Higgins from a suggested story written by Virginia Kellogg. It stars Dennis O’Keefe, Alfred Ryder, Mary Meade, Wallace Ford, June Lockhart, Charles McGraw and Art Smith. Music is by Paul Sawtell and cinematography by John Alton. Plot finds O’Keefe and Ryder as dedicated Treasury agents assigned to go undercover to break up the counterfeiting ring at the center of The Shanghai Paper Case. Posing as low ranked hoodlums left over from a long thought of disbanded gang, the two men find themselves immersed in a dark underworld of violence and deceit. Getting in was easy, coming out alive is a different matter.

The first pairing of director Anthony Mann and master cinematographer John Alton, T-Men is tough semi documentary type film noir that manages to break free of its plot simplicity confines to become a fine movie. Beginning with a foreword delivered by a stoic Treasury official, the film initially feels it’s going to be standard gangster/cops fare. But once our two intrepid agents go undercover and we hit the underworld, Mann and Alton shift the tone and the film becomes a different beast. The psychological aspects start to dominate the narrative, as both O’Keefe and Ryder cast aside their humanity to be at one with the grubby world. Under examination is the thin line between the law and the lawless, our two good guys are battling inner conflicts, their natural good instincts, but being bad has come easy. The edges of the frame have become blurred.

The psychological tints would mean nothing without Alton’s photography, it’s the key element and therefore becomes essential viewing for film noir aficionados. His deep focus chiaroscuro compositions are very striking, and tell us more visually than anything being said vocally. How he frames the heroic agents in the same shadowy light as the bad guys helps keep us the audience in deep with the shift from good world to bad world. This mise-en-scène style has taken over, it’s a life force all of its own, and as good as O’Keefe, Ryder and McGraw (always great to see him playing the muscle) are, it’s the photography that is the main character here. Mann does his bit, also, sweaty close ups and up-tilt camera work adding to the general disquiet hanging heavy in every room. While his construction of the films most shocking scene, involving a steam bath, is so good its been copied numerous times since.

Not as gritty as Raw Deal, which Mann, Alton and O’Keefe made the following year, but still as tough as old boots and cloaked deliciously with a shadowy beauty.