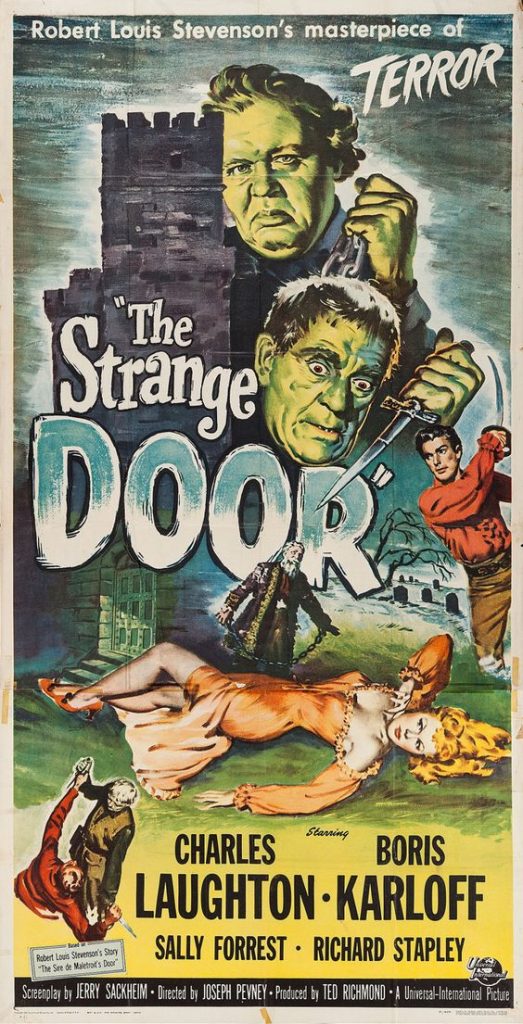 A very neat Hammeresque thriller with some good plot twist and moody atmosphere.

A young rascal is escaping the mob after accidentally killing a man and finds himself at the door of a sinister castle. The door opens and closes after him. But very soon it seems that he has been expected at the castle and for no other reason than to marry the lady of the house. So was his getting there a coincident in the first place?

It’s always nice to see two over-the-top actors fighting like professional beauties for the best of the picture. In this case, Laughton gallops away with his colours flying (in black and white). He really acts for every dollar. Perhaps Karloff would have been a better choice for this part, but Laughton’s tour de force is such an enjoyment that I personally wouldn’t have it any other way. Karloff’s part isn’t so interesting a material to start with, so he is pretty much wasted as far as his fans are concerned.

Unfortunately the romantic leads don’t fare well. The heroes’ part cries out for Erroll Flynn or Stuart Granger or anyone as confident, suave, butch and agile. Unfortunately Richard Stapley-Wyler has none of these qualities. Albeit undeniably handsome, his performance is timid and effeminate. It’s difficult to believe that in real life Wyler used to be a road racer. He walks like a ballerina in the mud and speaks in a flat, nasal voice which he obviously tries to make sound as low as possible. His total reluctance to act is sympathetically shared by another pretty but lifeless figurine, Sally Forrest. Personally I just think she keeps herself down as the leading man doesn’t light her fire. If only these two would have blended into the acting ensemble, this film would be so much more fun.

Nevertheless, nicely shot with good settings and soundtrack, it’s a treat to everyone who enjoys Corman’s Poe adaptations or Hammer’s dark old house films. Not quite cigar, but gives a good puff of smoke.