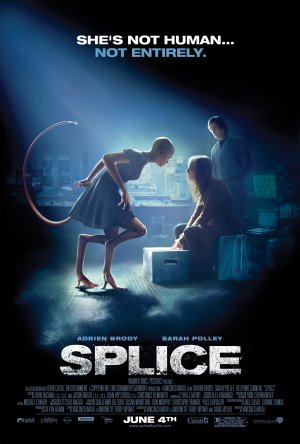 Splice was a movie that had a lot of promise. It seemed to be building towards something special, but got lost in an unnecessary plot thread that didn’t quite work towards the end. THis specific plot started with a scene involving the creature and the character played by Adrian Brody, and it was a scene that didn’t quite work because there wasn’t enough of a build up towards something like that happening. Sure there were some scenes leading towards that, but in my opinion those scenes were not enough to take such a major step forward, not after he first showed disgust towards the creature at the earlier phases of its development. On top of that the movie goes even farther into absurdity at the conclusion, involving the character played by Sarah Polley and the creature again, taking much of the intelligence of the film out of the equation.

In my opinion, the director was onto something in the beginning but then took the story into an unnecessary direction that might’ve still worked if there had been some real build up to those points which led to the conclusion. Sure there were some signs, but really not enough. Instead the movie ends in what can only be called a total WTF moment, and it doesn’t work at all. Not a horrible movie, but only average and not recommended.