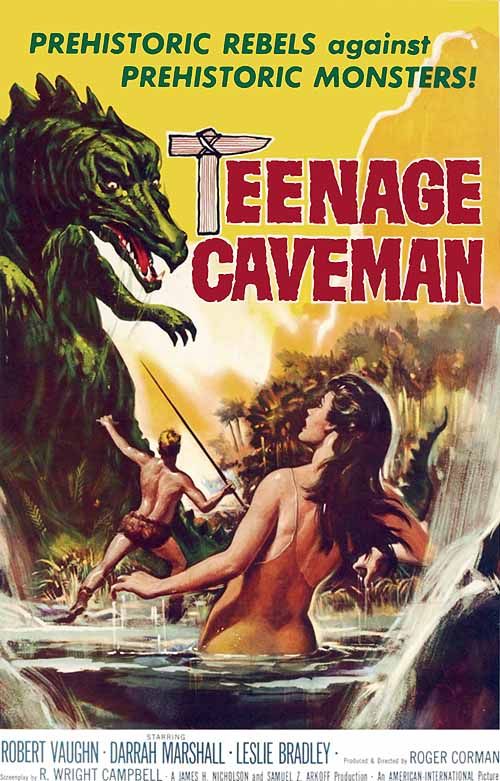 Conceived in the era of the 1950’s nuclear holocaust scare, TEENAGE CAVEMAN is an inspired (albeit low-budget) reflection of this period’s fears and a worthy attempt by producer/director Roger Corman to present more serious subject matter in the sci-fi genre.

On the plus side is the noteworthy script by R. Wright Campbell. Mr. Campbell’s association with Roger Corman includes scripts for FIVE GUNS WEST, MACHINE GUN KELLY, THE YOUNG RACERS, MASQUE OF THE RED DEATH (in which he re-wrote “Twilight Zone” fantasist Charles Beaumont’s submitted script for this film) and THE SECRET INVASION. Borrowing heavily the plot and ideas from Stephen Vincent Benet’s short story, “By the Waters of Babylon,” Campbell presents the intelligent, inquisitive and introspective son of the “symbol maker” (earnestly played by a 26 year old Robert Vaughn), who attempts to extend the boundaries of knowledge and existence well beyond the immediate environs. Most of this remarkable film’s meaningful dialogue is conveyed through the Robert Vaughn character and writer Campbell invests the story with a profundity and poignancy which is sadly lacking in most of the bland, dismal pap usually served up as entertainment.

In addition to the casting coup of Robert Vaughn and R. Wright Campbell’s exceptional script, praise must also be extended to composer Albert Glasser’s well-crafted and inspired music score (particularly effective during the climatic denouement). Glasser is one of the unsung maestros of film scoring in the sci-fi “B” genre (along with his contemporaries such as Ronald Stein, Paul Dunlap, Raoul Krausher, Marlin Skiles and Walter Greene) and many a low-budget feature has benefited considerably from his skilled and gifted contribution.

TEENAGE CAVEMAN quietly presents its message to the viewer with sincerity and dignity. It stands as an honourable effort to enlighten as well as to entertain and exemplifies that in good film-making with the constraints of time and budget, the necessity of more creativity, ingenuity and talent to fill the gap.