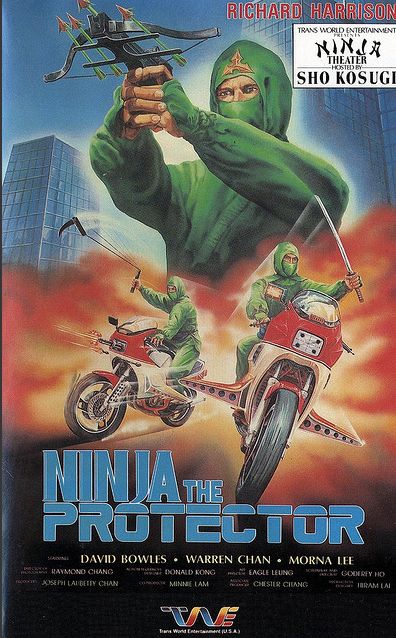 Richard Harrison once again finds himself in heavy mascara and camouflage ninja togs whilst being edited into a completely non ninja movie here!

Fair enough, the movie is certainly better than many of the other atrocities that Ho has chosen as his base for these films but it must nonetheless also rank as one of the most bizarre choices of film into which to edit in a tenuous ninja plot.

Still, it’s the ninja action we want to see in this, so does our man Ho deliver the goods? Well sadly, (but as per usual in these movies) there’s just not enough ninja activity on offer here which proves a genuine shame as what is present is great fun, for instance the ninja motorcycle duel! Also present and correct (but not necessarily welcome) is the abrupt ending (although there is admittedly a strange and unique charm in Ho’s sudden cessation of these movies – it appears to be a trademark of his!)

Is it worth watching? For Z-grade ninja movie fans (of which I am one)of course! Everyone else would be well advised to steer clear….A Godfrey Ho film to the uninitiated may prove just too much for one’s cerebral health!