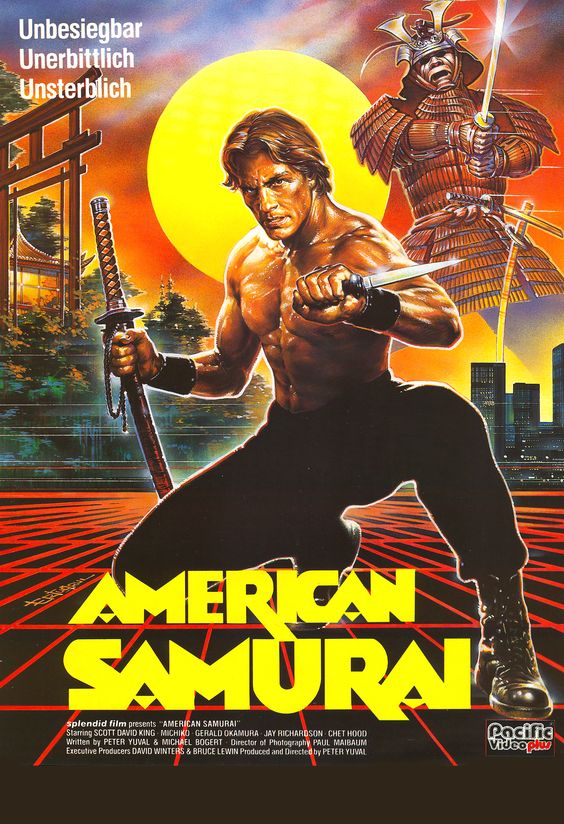 Kind of a ripoff of American Ninja, white guy learns Japanese style blah blah blah. Unlike the characters in that series of movies, some of the people in this actually do seem to know martial arts. Kind of a cross between a genuine fu flick like a Jet Li movie and typical American crap.

The rest of the plot is……ah who cares, its a samurai movie, doesn’t matter. 😛

Unlike American Ninja this movie doesn’t have 2 guys taking on dozens of “ninja masters” that can be knocked out with one punch, this has more of a realistic one on one style and it is a challenge for the combatants. Much like Blood Sport.

What it does have going for it it the interesting fighters in the last 45 minutes of the movie, the first half of the movie is just filler to make an excuse for all of the fighting at the end so skip it.

The fighters at the end look like they were pulled straight from an early 90’s 2D arcade fighting game. That is the high point of this flick.

The low point, and I mean VERY low point is the last fight scene. Both of the “samurai” are wearing the same black and white outfit, no other colors. If you look close during the last fight though you can clearly see red streamers coming from out of the frame, they reused footage from one of the earlier fight scenes to add length to the last fight and it looks SOOOOOOOO cheesy. Also the actors don’t know a damn thing about sword fighting, they just clang them together for 5 minutes, that coupled with the reused footage makes it a non-climax.

Since 45 minutes of this movie is solid fighting with fighters that actually do know how to use their weapons, the very last scene isn’t as important.