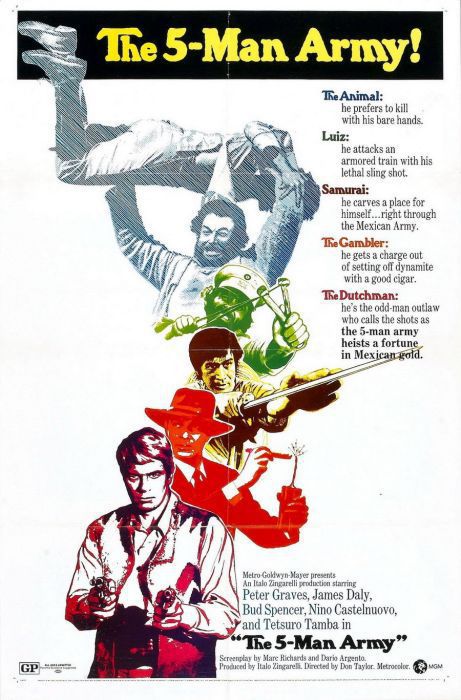 American actor Don Taylor tries his hand at directing a truly international “spaghetti western”. A fast pace, fine musical score and satisfactory performances hold this rip-off of “The Magnificent Seven” and “The Wild Bunch” together over the course of nearly two hours.

“The Dutchman” (Peter Graves) recruits for of his old friends to go on a suicide mission. This involves infiltrating, capturing and then making off with a train filled with Mexican Gold. Each will get a small share; the rest will go to aid the Mexican revolutionary forces that the Dutchman has fallen in with.

Young writer Dario Argento’s script doesn’t hold up to his later flair, but keeps the familiar characters and plot line interesting enough to hold dedicated attention. The Dutchman is the typical hero of the piece, and Graves comes to life despite the fact that we know nothing about his background. He seems a little uncomfortable  somewhat uneasy  although his dedication to the robbery is very convincing. He does introduce the 4 members of the “Army” in an obligatory speech, and the rest of the cast stick their characterizations with little or no added ingenuity.

First, there’s Augustus (James Daly), a grizzled demolition expert who’s been in hiding since Spanish-American War. Augustus and Dutchman are two tired, old men and they have a great dramatic discussion reflecting the changing of the times and how they no longer fit into society. Bud Spencer is a lot of fun as the dimwitted Mesito, a giant whose sole redeeming quality seems to be his brute strength. Interestingly enough, Spencer recorded his own dialog in English, and his real voice simply adds to the humor his character  he’s got a thick accent, but good command of English, which balances out perfectly. Then there’s Samurai (Tetsuro Tamba) a silent warrior who was rescued from a circus sideshow to help carry out the mission. Rounding out the band is Luis, a former acrobat-turned-outlaw who found a home in the Revolution while on the run from the Mexican Army. Throughout the piece, the heroes are out to satisfy their own greed, but a surprise ending ties together all of the loose ends.

The musical score of this piece is above-average work from the always-excellent Ennio Morricone, who contributed scores for some of the best spaghetti westerns, including “The Good, the Bad, and the Ugly”. It’s appropriately rousing and adds flair to the exciting moments, and occasional mournful and evocative in the slower, sad sequences  notably, Dutchman’s moving speech near the end which explains just why he’s in league with the Revolution. He also contributes a fine extended, ultra-weird piece when one main character falls from the train and has to run for several minutes to catch up with his comrades.

The film never has a boring moment. Taylor keeps his camera moving in every scene, always showing off sagebrush, pueblos and military garrisons which always look and feel real. The movie is about men on the go  it never stays in one location very long, and while there, something exciting is always happening. Every piece of dialog helps to flesh out the characters or explain the mission further. When people aren’t talking, they’re in an intense situation  whether it be the ambush of a Mexican truck, escape from a military prison, or the lengthy takeover of the train (which, perhaps, is one of the best extended action sequences ever caught on film)  there is never a dull moment.

Taylor manages to keep the action interesting enough and different enough in each scene, too  there’s not just lots of fast gun-play going on. There is one notable capture-and-escape sequence involving a heavily fortified Mexican garrison, and the 20+ minute sequence depicting the infiltration and capture of the armored train is nail-biting. The stunts look to be performed by the real actors on a moving train  there is no rear-projection here.

The production values are higher than usual for this genre. The crowd scenes are truly massive, and Taylor is able to take time establishing his locations using cranes and long pans before jumping right into the action. Although the first half of the film has a dry, depressing look to it (the exteriors are barren and desolate) the second half features several large, open grassy plains  something not often seen in a film of this kind. The territory surrounding the train, especially, looks vast and open  only once do we notice the painfully obvious presence of a sound-stage, as the characters observe the train from a distance.

There are a lot of little things that go wrong with the production or some small parts of the film which lack badly needed care, however, which hamper the effectiveness of the proceedings. The second unit direction seems a bit half-hearted. When extras are shot and die, they slump over with considerable effort and never really look to have been shot. There are also noticeable gaps in logic  the heroes board the train in full view of some very unobservant Mexican guards; the main characters seem afraid of a giant cannon on the train, but it’s not as though it can fire at them at such a close range. Also, the engineer (Jose Torres) is taken prisoner because he’s allied with the military government, but near the climax, his character disappears. One moment he is standing on the train; in the next shot he is simply gone. What happened to him? In the end, “The Five Man Army” is no more than merely a hash of clichés, but manages to be engaging and entertaining throughout without offering anything new and notable.