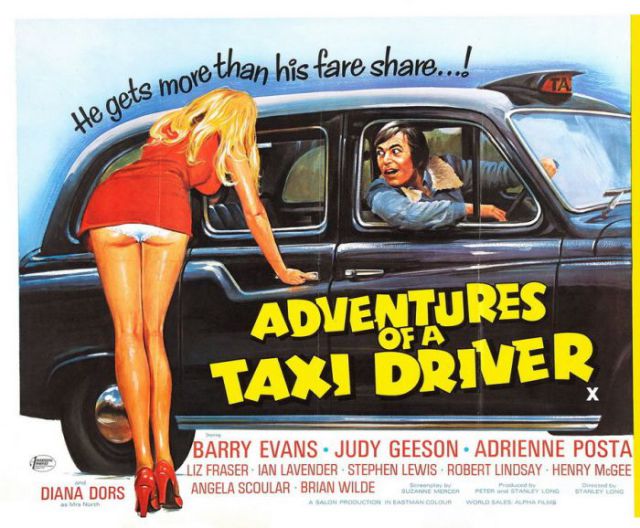 What is to be said in the favour of Adventures of a Taxi Driver? Very little, it’s sad to say. The film gives new meaning to the term second hand: it’s a rip-off of the Robin Askwith Confessions series of sex comedies, which themselves were already sub-Carry On crossed with continental saucy fare. Taxi Driver also mixes in elements of Alfie (the direct to camera narration of the Lothario protagonist), On the Buses (the bickering family arguments) and British B movies of the early 60s involving petty crime. This wholesale appropriation of other people’s ideas might be acceptable if they were used here with any skill or aplomb; as it is, the film is tedious, plot less, poorly directed and almost aggressively unfunny. It’s attitude to women is dismissive and offensive, and even the usually charming Barry Evans – who made the infantile and racist sitcom Mind Your Language palatable – is heavy handed and dislikeable here.

The few pluses include good comic turns from Adrienne Posta and Diana Dors, a winsome performance from Marc Harrison as Evans’ thieving brother and the chance to see, briefly, Stephan Lewis doing Blakey as a strip-show doorman. There’s also some intriguing footage of mid-70s Soho which might be of value to social historians.

I suppose that the film does capture a certain mood of cultural desperation which clearly reigned in the UK at the time. Evans’ sexual shennanigans seem like the last resort of a man with nothing else to do; the sexual revolution has failed to make life interesting, as people are just as boorish and neurotic and dumb as they ever were. Whether this is a real reflection of the times or merely the projection of the filmmakers’ own limited intelligence and wit is a matter of conjecture, although the huge box office success of the film suggests that it did offer the film-going population something they could respond to.

0 35
Millennials And The Movies