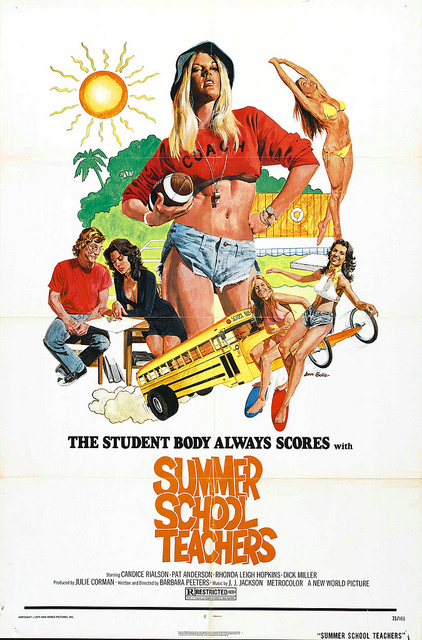 Three ridiculously sexy girls go from Iowa to Los Angeles to teach summer school in this quasi-sequel to “The Student Teachers”. But whereas the first film was marginally realistic and believable, this is completely absurd, but a lot more fun. The students at this school all look like they flunked several years (maybe even a decade or so) and the female students seem to have chosen summer school because the flexible hours wouldn’t interfere with their regular gigs as pole dancers. (The girls’ PE class, for instance, is first introduced with a close-up pan of their gyrating, barely clad asses). And why would they teach subjects like PE and art in summer school, anyway? What kind of idiot would flunk those subjects? (I actually once taught math in summer school and it was NOTHING like this, although perhaps that was a good thing because I might be in jail right now if all the female students had looked like this).

In typical Corman/New World fashion there is, of course, some amount of serious plot-lines and half-assed feminism thrown in with the gratuitous T and A. One teacher falls in love with a delinquent male student (which even if you’re a young, sexy female, is a professional and legal no-no). The art teacher meanwhile inadvertently gets involved in nude modeling. And in the most ridiculous story Candice Rialson tries to start a girls’ football team against the wishes of Dick Miller’s sexist football coach.

The female director of this Barbara Peeters would go on to direct the cult classic “Humanoids of the Deep”, which she complained Corman later went back and salted with even more gratuitous female nudity. Well, I wish he’d done that with this one too, at least with regards the mouth-wateringly luscious Candice Rialson. Seeing a movie like this without regular nude scenes from her is like watching a Laker game with Kobe Bryant sitting on the bench. Seriously though, Rialson was a very appealing low-budget actress and I was sad to learn she died back in 2006. Dick Miller is an institution in Corman movies going all the way back to “A Bucket of Blood”, but he actually gets a fairly large and well-developed part here as a macho, sexist coach (at, um, a summer school). This movie has turned up recently on a couple of legitimate DVD collections, so it might just be worth checking out.