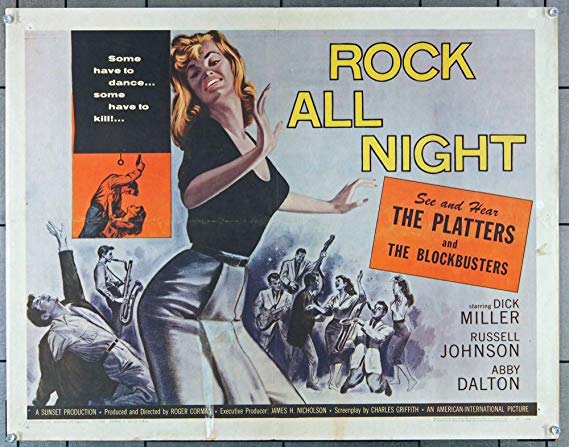 Finally got to see this classic Roger Corman cheapie, and of course it’s a total blast. The best part obviously is seeing Dick Miller in a rare starring role, and as a tough street kid no less, who takes no guff from anyone and is always making wisecracks.

Miller plays “Shorty” who gets thrown out of one rock joint but ends up in another, where a pretty girl is auditioning and we get introduced to various assorted crazy characters. Eventually two crooks (led by “The Professor” from Gilligan’s Island!) come and hold everyone hostage, and Shorty constantly insults the crooks, as well as the cowards in the place who refuse to take a stand.

One of the funniest characters is a “hep cat” beatnik rock manager who comes out with great line after line. Others include a boxer, his sad girlfriend, a wanna-be tough guy, his drunk girl, a reporter, a shake-down artist and more. The musical numbers are good, and it all resolves in just over an hour.

“Rock All Night” is definitely not disappointing is you expect exactly what it is, a fun hour of no-budget film making.