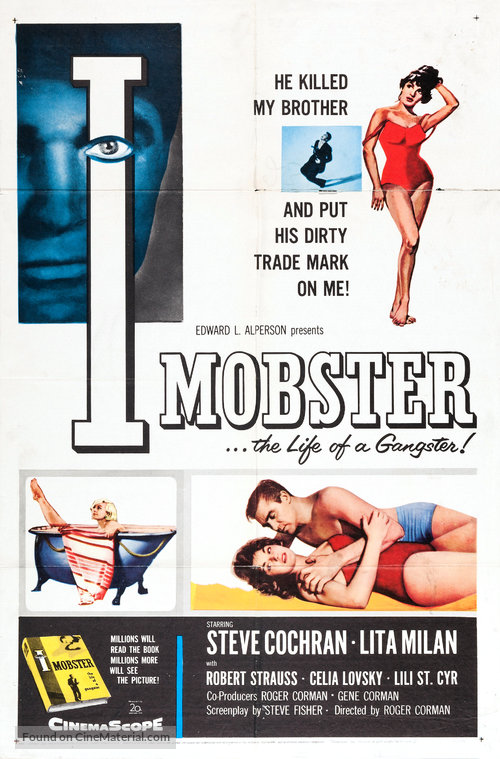 I Mobster is directed by Roger Corman and adapted to screenplay by Steve Fisher from the novel written by Joseph Hilton Smyth. It stars Steve Cochran, Lita Milan, Robert Strauss, Celia Lovsky and John Brinkley. A CinemaScope production, music is by Gerald Fried and Edward L. Alperson Junior and cinematography by Floyd Crosby.

Roger Corman was late in coming to the film noir/crime splinter of film making, but in 1958 he manufactured two very accomplished gangster pictures. Machine Gun Kelly starring Charles Bronson was something of a success, so it was hardly surprising to see Corman serve up another helping of gangster cinema with I Mobster.

Pic charts the rise of Joe Sante (Cochran), from a boy running bets for a local hood, to being the leader of all illegal and violent operations in the city. There’s nothing remotely new here as per the genre scheme of things, it is what it is, a straight forward tale of a bad man who finds himself getting deeper in the mire the higher up the hoodlum ladder he gets. On the side of this normal trajectory is how his climb affects those closest to him, notably the two ladies of his life, Ma Sante and Teresa Porter.

Come the resolution of the tale, Joe Sante is hit with the stark realisation of the life he has led. But is it too late for him? Along the way there’s some sexy sizzle by way of a show put on by burlesque queen Lili St. Cyr, while Corman even inserts a sex metaphor that’s so unsubtle that Hitchcock himself would doubtless have approved.

Corman re-teams from “Kelly” with Crosby and Fried, who once again provide crisp black and white images and furious jazz strains respectively. He is well served by his cast, Cochran is too old for the role as written, but he has a magnetic presence. Milan impacts strongly as the one time honest girl turned moll in the name of love, while Lovsky as Joe’s weary mother is hugely effective in conveying a parent with a broken heart. Best of the bunch is Strauss as Black Frankie, he’s a larger than life henchman and with the writers affording the character some telling passages in the play, Strauss responds in kind.