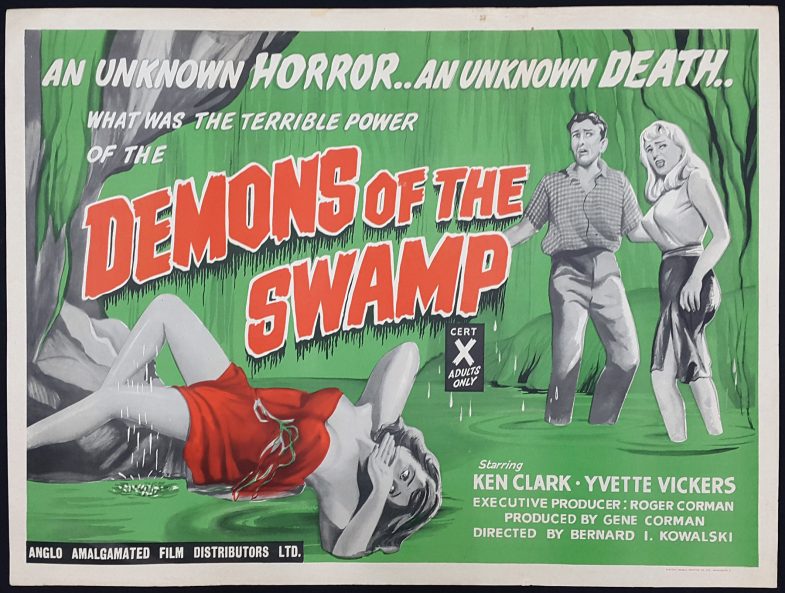 Attack Of The Giant Leeches (also widely known as just “The Giant Leeches”) concerns the horrors that are going on in a swamp community. A game warden (Ken Clark) has conflicts with his girlfriend (Jan Shepard) and her father (Tyler McVey) when there are deaths and disappearances around the swamp. He later learns giant, mutated leeches are lurking in the swamp. A side plot features Liz Walker (Yvette Vickers) despising her husband (Bruno VeSota), and carrying out an affair with one of the swamp locals (Michael Emmet.) Once again radiation is mentioned as the possible source that has made the small bloodsuckers grow into man-sized monsters. The swamp people are portrayed as backwoods, somewhat ignorant people, while the folks from town are more proper and classier characters. The acting is not too bad for this type of picture; maybe somewhat wooden at times, but the story is interesting and not badly shot. There’s gruesome fun as the leeches slurp and suck out the blood of the victims they keep in an air-pocket, underwater cave . Interestingly, the lead couple (Ken Clark and Jan Shepard) had both done Elvis Presley movies prior to this low-budget grinder. Yvette Vickers always gets mentioned for her fine, sultry portrayal of the young, trampy wife carrying out an adulterous affair. Bruno VeSota turns in a good performance as her somewhat submissive husband. His character becomes more interesting when he drives his wife and her lover deeper into the swamp; threatening them with a shotgun. The leeches are obviously men in rubber leech suits, and may provide some laughs (as with the rest of the movie) to audiences who can find silliness out of these oldie, B-flicks. I would say Attack Of The Giant Leeches can be gritty fun for those who don’t expect too much, and to those who love and collect this type of movie.