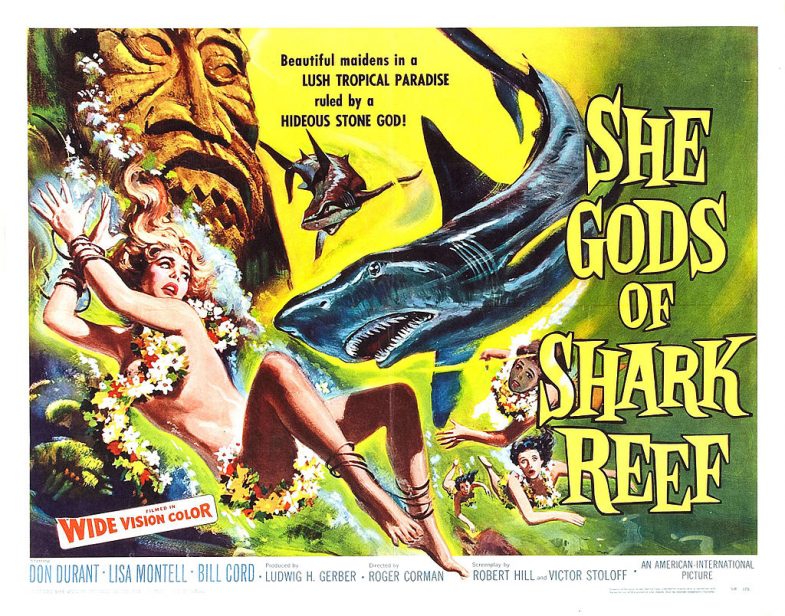 A simple, one-lined description of this movie would sound a little like: two guys wash ashore a tropical island exclusively inhabited by women that dive for pearls all day and worship ocean Gods Terrific! Sounds like a movie many (male) exploitation fans would want to see. Or better yet, where can we go to book our very own holiday to this island? In reality, however, “She Gods of Shark Reef” is nothing but a good-looking package with absolutely no content. Roger Corman is one of the greatest and most important directors in (B-) movie history, but many of his obscure mini-budget productions of the late 50’s really aren’t worth bothering for. Movies like “Creature from the Haunted Sea”, “Attack of the Crab Monsters” or this “She Gods of Shark Reef” were shot in a period of only a few days and without a real script, merely because Corman had a handful of extra dollars to spend and/or wanted to make more out of a certain filming location. The events take place in Hawaii and the beautiful images of this wonderful place are the ONLY reason to give this movie a glimpse. It’s one of Corman’s first movies shot in color and the place does look enchanting even though nothing really is happening there. The two male leads are supposed to be running from the law and the female leader of the island doesn’t want them there, especially not since one of them is after her slave girls. The other guy is more interested in the shiny pearls, so needless to say he’s not going to make it out alive. Or is he? You better not be expecting any vicious shark-attacks or virgin sacrifices, because you WILL feel cheated. The closest we come to an action sequence is when a native girl encourages the handsome blond guy to dance with her. Despite the gorgeous setting and promising (but misleading) title, this is one of the most boring films I ever watched. 63 minutes never lasted this long