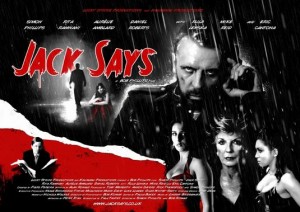 Film Noir is a uniquely American product, but its influences over the decades have stretched far beyond Yankee borders – in fact, you can feel its resonance across the Atlantic, where the French coined the term and designated the genre in the early ’50s. Neighboring Britain is no stranger to the Dark World of gangsters, femme fatales, double crosses, witty repartee and mysterious murder. JACK SAYS , the middle chapter of a tantalizing trilogy of torment, treachery and trouble, is a modern but faithful update on the familiar noir tradition. This installment focuses on our hero’s amnesiac oddyssey from the misty alleys of London to the dangerous streets of Paris after waking up beside a bloody corpse, and features rising UK star Simon Phillips, who perfectly embodies the character’s complex blend of likable regular guy, unwitting fall guy, unfortunate dupe, reluctant romantic and ultimately two-fisted hero – the classical film noir anti-hero.

Will the Thrill: Jack Says seems to be a conscious tribute to classic American film noir, as well as vintage UK crime hits like Get Carter. How aware were you of these influences during filming?

SP: Jack Says was a big melting pot of ideas and pre-existing cinematic influences in which we tried to pay alot of homage to the old noir films and charcaters of cult classics. The writing and performances by all actors were steered by films such as Pulp Fiction, Double Indemnity and Brick. It was a real pleasure to pull these elements into a British film, which was lacking in the marketplace.

Thrill: Do you see a resurgence of the crime genre in new British cinema?

SP: The crime genre is certainly thriving, in production terms, currently. I know of six other similar genre films in production as we speak – including us – we’re producing the prequel to Jack Says entitled Jack Said – which stars Danny Dyer and David O’Hara.

Thrill: What attracted you to this role?

SP: I loved the character of Jack in Jack Says. He seemed to be the type of man that believes in nothing but has a morale code which exists even in the vacum of amensia state that we find him. I always liked not knowing everything about film characters – we didn’t need their whole back story and let the audience make some leaps and assumptions. It’s a charcater that I have the honour of reprising in Jack Said and I am very pleased to be able to re-visit and flesh out some of the more mysterious elements that surround him. 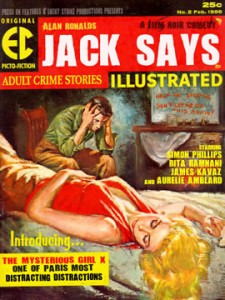 Thrill: The film features an eclectic, interesting and sexy cast. How would you describe the working atmosphere on the set?

SP: Working on film sets is like having a second family. It’s a sustained and intense period of time with people you don’t really know – living together, sleeping together, working together, eating together and then waking up tomorrow and doing it all again. I often feel a kind of withdrawal after leaving a film as the bonds made are usually very unique and special. Sadly on this film one of our actors, Mike Reid, passed away during the filming – which was very sad for all concerned but again we pushed through to complete and dedicate the film in his memory.

Thrill: Your imdb page is very busy! What’s are your goals as an actor? Is Jack Falls a sequel to this film?

SP: Jack Falls is indeed a sequel to Jack Says, and Jack Said (currently in production) is the prequel. The trilogy will be complete by the end of 2010.
As an actor I constantly look for the films that I would like to produce (not simply star in) – as if you have a belieif in the film itself and not just the charcater, then you energy to see through very long filming days is slightly elevated – which is very important. There’s nothing more important then a great script and good characters.

JACK SAYS will premiere on this side of the Big Pond starting April 3, courtesy of Monogram Releasing.