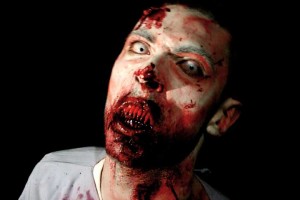 “Throw another leg on the barby,mate!”

Everyone was horrified by the recent wildfires that swept Australia. But few have heard of, or reckoned with, the other horrors afflicting the Outback these days, specifically the supernatural monster outbreak so grimly and brilliantly depicted in THE DEMONS AMONG US, maiden mutant madness from the delightfully demented mind of fledgling filmmaker Stuart Simpson. He is a indeed genius among us.

Will the Thrill: “Demons” is deliriously, deliciously surreal. What were your intentions/influences for this dreamy/nightmarish approach? Naturally I thought of David Lynch…

SS: Yeah I love Lynch’s work too especially his use of sound design and unique use of camera. I also like the notion that dreams play a huge part  in our lives whether we are conscious of it or not, and am a big fan of surrealism in all forms. I’m inspired by my waking thoughts every morning, and of course our waking life influences our dreams. But what fascinates me about dreams and more relevantly in this instance, nightmares, is that they work on a deeper level that is not directly apparent but still makes complete sense. And also in dreams we are completely honest with ourselves and our inner truths. Its cool that most of the time they unravel in a kind of metaphor that you have to dwell on over a cup of coffee or in the shower. And i just love dream sequences in films, they’re awesome.

Thrill: Would you characterize the facially-challenged antagonists in this film as ghouls, zombies, demons, all the above? Does it matter?

SS: They’re Demons. I thought the title of the film gave it away some (haha) 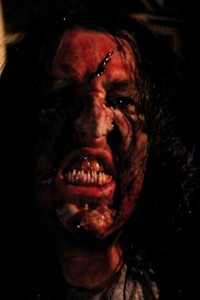 “Do I look like a zombie to you, asshole?”

Thrill: Do you see hi-def video eventually replacing 35mm altogether, even in mainstream movies? Expense and expedience aside, what is your preferred medium?

SS: Yeah i do think video will eventually replace film. Money talks. And plus it just makes sense when you’re editing it digitally too. The quality of video is just getting better and better. You wont know the difference soon enough. I’ve never shot on film other than 8mm because its too expensive. There will be a whole new generation that will be the same and wont know what they missed out on. I doubt I’ll ever shoot on film and it doesn’t really both me to be honest. Its what you’re shooting that counts right? 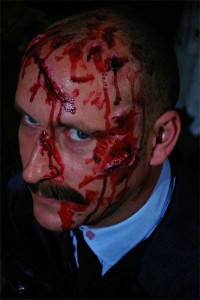 “I’m not bleeding or anything, am I?“

Thrill: The 70s and early 80s boasted a sustained surge of Australian genre films (The Last Wave,  Picnic at Hanging Rock,  Mad Max, Roadgames,  etc.) With recent films like yours and Wolf Creek, do you sense a new wave of horror bubbling up from Down Under?

SS: Definitely. There’s heaps of independent horror films being made here at the moment. Haven’t seen too many completed ones yet so can’t tell you the quality of them but its cool to see people getting out there and just doing it. The funding bodies here don’t throw money at genre films so you pretty much have to do it on your own. Hopefully this will change in the future, although I doubt it.  It’s more likely that funding will come from overseas investment. If someone wants to send some money my way please contact me (haha) 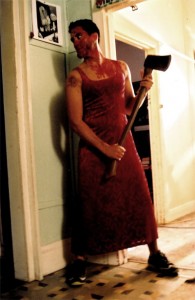 Thrill: You are obviously a uniquely visionary filmmaker. What’s next on your audacious agenda?

SS: We are in the final stages of shooting The Dark Psychosis, a feature length horror/scifi/comedy spectacular that includes 6 short stories to smack you in the head.  Expect killer vixens, talking bellybuttons, alien babies, psychopaths, mutants, buckets of gore, sea monsters and the apocalypse.  We have 4 complete, one in post production and are currently shooting the last and longest installment. Add our MySpace or Facebook groups to keep up to date on it’s progress – I’m really excited about this project, it’s completely deranged!

For even more insanity from Down Under, surf over to Lost Art Films.

The Demons will be among “U.S.”  beginning Friday, March 27, 2009 at the following locations, courtesy of Monogram Releasing: